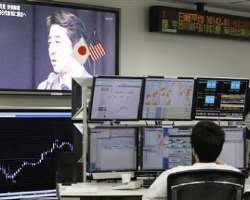 The blue-chip average roared past the 15000 mark for the first time ever as traders cheered data suggesting than labor market is in better condition than previous thought.

Wall Street has had a manic week: The markets sold off on Wednesday, just to rally on Thursday. Now, world trading desks have focused their attention squarely on the American economy.

Economic Woes 'In the Rearview Mirror'
The Labor Department said nonfarm payrolls rose by 165,000 in April from March, beating expectations of 145,000. The unemployment rate ticked down to 7.5% from 7.6% for the month, the lowest level since December 2008. Economists expected the rate to hold steady. March’s nonfarm payroll increase was also revised up to 138,000 from a previously reported 88,000.

"For investors, today’s report is a 'green light' of sorts," Dan Greenhaus, chief global strategist at BTIG wrote in an email. Michael Block, chief equities strategist at Phoenix Partners Group, echoed that sentiment. He said to expect a pullback on Monday, but then gains throughout next week as investment managers move clients' money off the sidelines and into equities.

Also on the economic front, the Institute for Supply Management's gauge of service sector activity fell to 55.0 in April from 56.5 in March, missing expectations of 56.0, and suggesting the sector is expanding at a slower pace. Readings above 50 point to expansion, while those below point to contraction.

Meanwhile, the Commerce Department reported factory orders tumbled 4% in March from February, considerably worse than expectations of a 2.6% decline. Excluding the transportation segment, orders were down 2%.

In corporate news, The New York Times reported regulators have stepped up their probe into alleged power market manipulation by J.P. Morgan Chase (JPM). The paper cited a confidential document it obtained in the article.

In Asia, the Chinese Hang Seng ticked up 0.1% to 22690. The Tokyo Stock Exchange was closed for Constitution Memorial Day.