Imoke Thanks President Jonathan On Bakassi, Deal On 76 Oil Wells 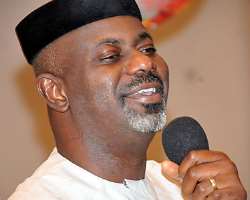 SAN FRANCISCO, May 02, (THEWILL) - Governor Liyel Imoke of Cross River State has commended President Goodluck Jonathan for measures put in place to ameliorate the impact of the loss of at least 76 oil wells when a part of the state (Bakassi) was ceded to Cameroun.


The People’ Democratic Party (PDP) Board of Trustees (BOT) Chairman, Chief Tony Anenih, disclosed this while fielding questions from journalists after leading other members of the BoT to a closed door meeting with the governor in Calabar Thursday.


According to Anenih, Imoke has expressed gratitude to the President for handling issues associated with Bakassi including its ceding to Cameroon, The Green Tree Agreement implementation as well as the resettlement of displaced persons.


On the ceding of the 76 oil wells to Akwa Ibom, the BOT Chairman further disclosed that Imoke has sent a goodwill message to the president for ensuring that the matter was handled once and for all in the interest of the two sister states.


Anenih, who was unwilling to disclose details of their discussion with Imoke, however, said all contending issues tabled would be resolved to the satisfaction of the parties involve.


He listed issues discussed to include Bakassi, oil wells, Governors’ Forum, development of the South-South geopolitical region and discipline within the PDP.


Anenih, who described Imoke as Chairman of South-South Governors’ Forum and a very strong member of the PDP Governors’ Forum, said they were in Cross River in continuation of their visits to PDP controlled states.


In his introductory remarks, Imoke described Anenih as a leader and father that has succeeded in keeping the party in one piece.


Imoke said the state felt honoured to play host to the BoT members, assuring that the party would continue to remain united despite its challenges.