Ex-Pope Benedict Back At Vatican To Live Out Retirement 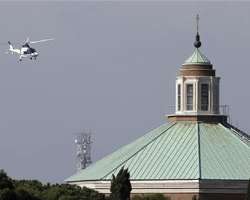 Benedict XVI moved back to the Vatican on Thursday, opening an uncertain era in Catholic Church history where an "emeritus pope" and a ruling pontiff will live as neighbors for the first time.

Benedict, the first pope to abdicate in 600 years, will live out his retirement in a restored convent in the Vatican gardens with a view of the dome of St. Peter's Basilica and just a short walk from the residence of his successor, Francis.

Benedict, 86, arrived by helicopter from Castel Gandolfo, the papal summer residence south of Rome, where he had been staying since February 28 while the convent was being restored.

Francis, 76, greeted Benedict in front of the convent, the first time they have met since March 23, when Francis visited Benedict at Castel Gandolfo and Benedict renewed a pledge of "unconditional reverence and obedience" to Francis.

A Vatican statement said the two later prayed together in the chapel of the small building, which also includes a library for the former theology professor, quarters for his aides and a guest room for his older brother, Georg, a monsignor.

"He is happy to be back at the Vatican ... where he intends to dedicate himself to the service of the Church, above all with prayer," it said.

Unlike on the day of his abdication and his March 23 meeting with Francis at Castel Gandolfo, Vatican television decided not to distribute images of Benedict's return. It gave no reason.

When the two met in March, Benedict looked exceptionally frail. But the Vatican says he suffers only from normal ailments of old age and has no serious illness.

While the presence of a reigning pope and a former one is a new situation, experts say it would only cause difficulties if Benedict tried to influence Pope Francis's decisions, something he has promised not to do.

Shortly before his resignation, Benedict said he would live out his remaining days "hidden from the world".

Still, some Church scholars say that in the event that Francis undoes some of Benedict's policies while he is still alive, the former pope could become a lightning rod for conservatives and polarize the Church.

CONSERVATIVE REFERENCE POINT
"Benedict almost certainly will be a point of reference for critics of Francis, especially in conservative circles. You can easily imagine them saying, ‘Benedict wouldn't have done it this way,'" said John Allen, author of several books on the Church and correspondent for the National Catholic reporter.

"That criticism will circulate on blogs, in journals, and in the pews, no matter where he's physically located, and Benedict himself won't be a party to it. If anything, being behind Vatican walls will make it more difficult for the opposition to reach him and claim some sort of blessing," Allen said.

Vatican officials have said the men, both of whom wear slightly different white vestments, would likely meet occasionally and perhaps confer on Church matters but that Francis is his own man.

"On a human level, it's hard to imagine that Pope Francis would treat the retired pope as some sort of 'untouchable'. I think they can certainly spend time together and exchange views without causing any crisis in the Church," said John Thavis, author of "The Vatican Diaries".

Benedict's two months away have allowed everyone to get used to the idea that he is no longer on the Vatican stage, said Father John Paul Wauck, professor at the Pontifical University of the Holy Cross in Rome.

"It was a healthy hiatus during which Francis had the freedom to establish himself as the new successor of St. Peter," Wauck said, adding that he would be surprised if Benedict tried to influence Church decisions.