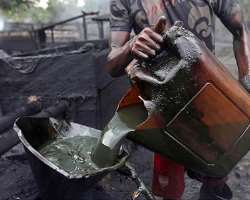 SAN FRANCISCO, May 02, (THEWILL) – The Two Senior School Certificate Examination (SSCE) holders were arrested on Wednesday by officers and men of the 3rd Battalion of the Nigerian Army, Effurun Barrack, Delta State, for their involvement in illegal oil bunkering on the Warri River.

Their arrest came as the Delta State Government demolished two buildings said to be used by kidnappers at no. 34 Odibo Street, close to Holy Crest School, in Warri, the Delta State capital.

The suspects were caught when the Commanding Officer of the 3rd Battalion of the Nigerian Army, Lt. Col. Ifeanyi Otu, led his men as well as some journalists on surveillance to Otumara Creeks, off Escravos in Warri South Local Government Area, where a large expanse of land used as illegal refineries was discovered and destroyed.

The suspects , simply identified as Alex Ebii (22) and Zion Takeme (26), were caught at about 5.30pm when the surveillance team was on its way back from Otumara in Warri South West Local Government Area, few kilometres to National Ports Authority (NPA) jetty while ferrying their loot to Warri with boats laden with five drums of diesel each on the Warri River.

They were said to be returning from Asugbo refinery camp and on their way to supply one popular Madam ManProsper (aka Egbele woman) who deals in diesel at NPA.

Earlier, the soldiers, onboard three military speed boats, had discovered a well-organised large field of local refineries suspected to be operated by a cartel, numbering about 10 with over 20 large iron and plastic (GP) tanks constructed there and loaded with already refined diesel.

At the scene, there were about three water pumping machines, including a big welding machine, which were set ablaze in the deep swampy forest.

It was also discovered that with the aid of the heavy welding machine, some local large ovens were still being construction by the bunkerers.

The soldiers who consequently set the facility ablaze, also discovered tanks of refined diesel and drums of crude oil.

One of the suspects, Ebi, disclosed that he went into the business of transporting luggage including illegally refined fuel to earn a living, while the other, Takeme, said he was woken up by a friend to assist to transport five drums of diesel from Asugbo camp to Warri for a fee of about N2,000 .

The Commanding Officer, Lt Col. Otu, while parading the suspects, described the discovery and destruction of the illegal refinery camp as mega, massive and unimaginable.

He, however, reiterated his resolve to mitigate the trend, saying people engaged in the illegal business should find a more legitimate business to do.

Meanwhile, following the rescue of a kidnap victim and subsequent arrest of one of the suspects, 21-year-old Edighe Oberri, last Monday, the Nigerian Police, Area Command, on Tuesday in Warri, has demolished the two buildings where the victim, Mrs Joy Elumah, was hidden.

It was learnt that the suspect, Oberri, who was arrested on Monday, while keeping vigilance over the victim, had since been shot dead while attempting to escape from the police net.

The Area Commander, ACP Hussein Rabiu, representing the Delta State Commissioner of Police, CP Ikechukwu Aduba, said that Governor Emmanuel Uduaghan gave approval for the demolition of the two buildings, adding that the police would henceforth demolish any house that is found to be a hideout for kidnappers in the State.

He said that the woman that was kidnapped and kept in the building, owned by one notorious kidnapper, Lucky , turned out to be the leader of the gang of kidnappers terrorising the area.

Rabiu further warned landlords in the state to properly scrutinise would-be tenants before giving their houses out to them for rent.