$4,095 Scam: EFCC Insist Hembe And Azubogu Have Case To Answer 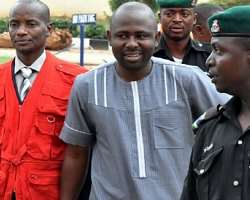 CONTROVERSIAL CHAIRMAN HOUSE OF REP. COMMITTEE ON CAPITAL MARKET, HERMAN HEMBE ARRIVES AT THE HIGH COURT IN ABUJA, MAY 17, 2012
Listen to article

SAN FRANCISCO, April 30, (THEWILL) - The Economic and Financial Crimes Commission, EFCC has told a Federal Capital Territory High Court sitting in Apo, Abuja and presided over by Justice Peter Kekemeke, to disregard the no-case submission by Honourable Herman Hembe, former Chairman of the House of Representatives Committee on Capital Market and his deputy, Honourable Chris Azubogu, insisting that the federal lawmakers have a case to answers in the $4,095 dollars estacode scam.

At the resumed hearing of the case on Tuesday, EFCC counsel, Chile Okoroma observed that the arguments canvassed by defence counsel in support of their applications are immaterial at this point; stressing that the fundamental issue remains that a prima facie case have been established against the defendants to warrant explanation from them before the court.

He said, from available indications, the accused were deceptive which amounts to dishonesty and punishable under the relevant laws. He therefore urged the court to refuse the application.

Earlier, counsel to the accused persons, J.S Okutepa, SAN and Onyenchi Ikpeazu, SAN while moving their separate motions for no case submission contended that estacode is money meant for a public servant who travels overseas. They said once the money is approved and the officer embarks on the journey, the money becomes his.

The duo of Hembe, and Azubogu are being prosecuted by the EFCC for allegedly converting the sum of $4,095 dollars paid to them as estacode for a conference in Dominican Republic, which they failed to attend; thereby committing an offence contrary to section 308 of the Penal Code Act Laws of the Federal Republic of Nigeria, 1990.

After listening to arguments from both sides, the presiding judge adjourned ruling to June 19, 2013