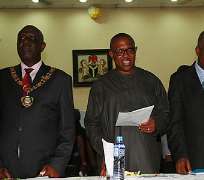 SAN FRANCISCO, April 30, (THEWILL) - The chairman of the Economic and Financial Crimes Commission, EFCC, Ibrahim Lamorde has charged accountants and auditors to shun corruption and take up the gauntlet in the fight against corruption. Lamorde made this call at a national workshop on anti-corruption organized by the Chartered Institute of Accountants of Nigeria, ICAN, at Akwa, Anambra State.

Lamorde who was represented by Osita Nwajah, acting deputy director, Public Affairs said corruption was the bane of Nigeria’s development and that accountants and auditors should be the first line of defence against corruption. He stated that if corruption must be exterminated, all hands must be on deck to fight the social malaise. He lamented the situation where Nigeria is ranked high in the corruption perception index.

Nwajah also told the gathering that their actions and reactions to commission of a crime, their ability or inability to do a thorough check on the books of companies or offices could be a clog in the fight against corruption. He challenged them to take ownership of the fight by dealing with corruption without sentiment.

Adedoyin Idowu Owolabi, the 48th president of ICAN in his keynote address, observed that the institute had hosted several anti-corruption workshops as their contribution to the fight against corruption and nation building. “This workshop, like previous ones, is designed not only to beam searchlight on a core aspect of the Nigerian economy considered germane to the building of the nation of our dream but also to reaffirm our position that the task of nation building is a collective responsibility”.

He declared that the theme of the workshop, “Enhancing Economic Growth through Anti-Corruption Measures” was chosen “to assess and evaluate not only the way and manner corruption has impacted negatively on the Nigerian economy in the form of unbridled larceny and criminal diversion to private use, of scarce public funds generated from local and international sources, but also to contribute towards the on-going debate on the way forward for the country”.

The president called on ICAN members to embrace the fight against corruption as it remains a challenge not only to Chartered Accountants, but also External Auditor who examines books of accounts of companies, institutions and organizations.

He warned that any member found to be involved in any act of corruption would be dealt with.

Governor Peter Obi, who was the host governor, said he was particularly delighted with the issue of discourse. Governor Obi enumerated the different ways corruption is celebrated in the country especially among the political elites and their supporters. He said “everyone must be subjected to checks and balances in order to achieve the best.”

Other papers presented at the workshop were “The Role of Chartered Accountants in Curbing Corruption in Nigeria” by Barnabas Achaka, Plateau State Auditor-General; “An Overview of the ICPC Act, the EFCC Act, the Money Laundering Act and the Code of Conduct Bureau Act: Enforcement and the Role of Chartered Accountants” by Prof. Taiwo Osipitan and “The Global Dimension of Corruption and Nigeria’s Economic Growth” by Ekpo Nta, Chairman ICPC, who was represented by Adebayo Kayode.