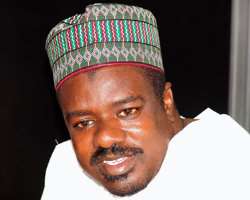 SAN FRANCISCO, April 30, (THEWILL) -Following the failure of former governor of Jigawa State, Saminu Turaki to attend his trial in the N36billion case of theft and money laundering instituted against him by the Economic and Financial Crimes Commission, EFCC, Justice S. Yahuza of the Federal High Court, Dutse has summoned his surety, Honourable Abubakar Bawa Bwari, a serving member of the House of Representatives to appear before him on May 16, 2013, “ to show cause why the recognizance entered into by him to produce the accused should not be forfeited”

Part of the notice, which was Tuesday pasted on the house of Hon. Bwari, at the Apo Legislative Quarters, read: “Take notice that you are hereby summoned to appear at the Federal High Court, sitting at Dutse Judicial Division on the 16th day of May 2013 at 9.00am. You are to show cause why the recognizance entered into by you to produce the accused in the above-mentioned charge should not be forfeited.”

Turaki was first arraigned by the EFCC before the Federal Capital Territory High Court in 2007 on a 32-count charge. The case was later transferred to Federal High Court; Dutse after he challenged the jurisdiction of the FCT court. He was subsequently re-arraigned on a 32- count charge at the Federal High Court, Dutse for allegedly misappropriating N36 billion while he was governor of Jigawa State.

Turaki had pleaded not guilty to the charge and was subsequently granted bail with Hon. Bwari serving as one of his sureties.