A NATION AT WAR WITH ITS PEOPLE 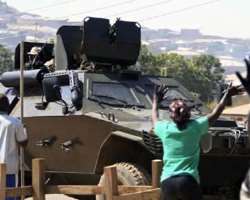 Nigeria is crashing all around us and tottering towards a failed state. Yet, the custodians and squanderers of the country’s oil wealth in Abuja and elsewhere keep behaving as if they were presiding over a nation beset by mere hiccups.

The massacre of innocent civilians in the town of Baga, Borno State, is only the latest evidence of a space where life is nasty, brutish, and violently cut short. Initial press reports stated that some 185 people perished in fierce fighting between members of a militant Islamist sect, Boko Haram, and officers of the joint task force. But Senator Maina Lawan, who is from Baga, asserted that he counted 228 casualties when he toured the devastated town. In addition, he said he found more than 4000 houses destroyed. Meanwhile, the Federal Government and the Nigerian military claimed that the death toll was 25.

Of course, the understatement of the scale of tragedies is a well known policy of the government. Whenever Nigerians die in scandalous numbers, the government trots out a casualty figure that often represents a mere 10 percent of the actuality.

In this case, whether the number was 228, 185 or 25, the conclusion is inescapable: too many innocent people lost their lives in a horrific, ill-conceived and poorly executed quasi-military operation. That’s the bottom line.

President Goodluck Jonathan has ordered an investigation into the massacre. It’s the usual ho-hum response. Nigeria is a place where, if you wait a day or two, another similarly dreadful event – even if not on quite the same scale as Baga – is bound to happen. The Presidency will then make its usual pledge to get to the root of things.

Here’s a safe prediction, then: Nothing will come out of the Baga investigation. No soldier much less an officer will ever be held responsible for mistaking unarmed, innocent people in Baga for discounted humans that deserved to be killed as if they were cattle.

At any rate, the horror in Baga is but one more illustration of a country in much deeper crisis than its leaders – and many citizens – acknowledge. Nigeria has actually been in a state of war for several years now, but there appears a conspiracy to conceal that fact. That war is, in large part, a product of the inherent incoherence of the concept of Nigeria.

If there’s a section of Nigeria where people are enthusiastic about the state of Nigeria, I’d like to know about it. At fifty two years old, Nigeria is besieged by at least four quasi separatist groups: Boko Haram, the Movement for the Emancipation of the Niger Delta, the Movement for the Actualization of the Sovereign State of Biafra, and the Oodua People’s Congress.

Of these four, Boko Haram – with its combination of religious fundamentalism and violent attacks – appears to have commandeered media attention. Some four years ago, the Nigerian state struck a so-called amnesty deal with MEND. But that deal is in reality shaky. It requires a steady funneling of cash into the pockets of a few ex-militant leaders, to the dismay of their frequently forgotten lieutenants. The recent killing of twelve police officers in Azuzuama, Bayelsa State, provided proof that militancy is very much alive in the Niger Delta.

Besides, it appears as if MEND is being refashioned for a decisive role in the 2015 presidential election. In the last month, two friends of mine based in Abuja have told me that President Jonathan MUST win re-election – or re-selection – in 2015 because he has MEND as his trump card. Both men admitted that President Jonathan has been a woeful failure, even for the Niger Delta. Even so, they contended that, should Mr. Jonathan fail to secure the mandate to continue, then MEND is bound to ramp up violence in the Niger Delta, virtually shutting down Nigeria’s oil production. This prospect, both friends reasoned, would in the end strike fear in the hearts of the oil-dependent political and corporate ruling class in Nigeria, compelling them to support anything the president and his ruling People’s Democratic Party (PDP) are willing to do to secure another four years.

I wish I could describe their scenario as nonsensical, but that would be self-deception. As another friend of mine once told me, Nigeria is a country where any absurdity makes sense. Yet, that projection of MEND as the final cause of a Jonathan re-election provides yet another proof that Nigeria is a wobbly country living on borrowed time. If Nigeria were a firmly established nation, then such decisive means of blackmail would not be in play.

The other side of the coin, of course, is that justice should be the first condition of a stable nation – to invoke words Wole Soyinka deployed in his prison memoir, The Man Died. In the context of Nigeria, justice would suggest that the natural resources in the Niger Delta belong to the people of the area, instead of being hijacked by a visionless national elite incapable of creative application of the intellect to generate the resources to better their environment. In the spirit of true federalism, I support the idea of each part of Nigeria deploying their resources towards development. The Niger Delta deserves to keep most, if not all, the resources from oil. Every other part of Nigeria has its own bequest of resources, natural and man-made, to fund development.

To return to my original point: a Nigeria where any form of blackmail can be used to decide an election is a misconceived country. It’s a recipe for the intensified deployment of violence as a means of achieving political and other ends.

What most troubles me about Nigeria is the apparent deafness of its politicians and broad elite to the signs of a widening chasm, an increasingly violent repudiation of a country founded on false platitudes. That we’re one Nigeria is a huge lie. That we need to be one Nigeria is an even huger lie. A country, like any other community, must be shaped and animated by a set of values and principles. A sense of justice is indispensable. But before we even get there, a sense of volition – the idea that every group that belongs to this national family did so out of free choice, not compulsion – must be demonstrated.

Nigeria’s Supreme Court recently authorized the Federal Government to proceed to indict Ralph Uwazurike and other MASSOB figures for treason. Given Nigeria’s political history, it was a bizarre verdict. Uwazurike and MASSOB are no threats to Nigeria; Nigeria is a threat to itself. When the machinery of the Nigerian state – the police, the legislature and the Presidency – cannot answer the simple question of who killed twenty or so men whose corpses were found floating on Ezu River, then why blame anybody or group who openly seeks a divorce from Nigeria?

As far as the Nigerian state is concerned, the fate of the Baga dead is sealed. Justice will not be done to the victims of the Baga massacre anymore than justice was done to those floating corpses. The Nigerian state is in the business of discounting the humanity of its citizens, treating its people as if they were dispensable inconveniences. Daily, the Nigerian state wages a war against its people. Each time the state murders innocent people in Odi, Zaki Biam or Amansea, it fosters the normalization of anarchy. And as long as that anomaly persists, there will be a job for Boko Haram, for MASSOB, for the OPC, for MEND – and for other separatist groups yet unborn.