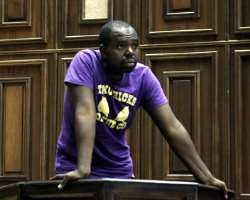 SAN FRANCISCO, April 29, (THEWILL) – The trial of Mustapha Umar, a suspected Boko Haram member accused of bombing the SOJ Plaza in Kaduna occupied by THISDAY, The Moment and The Sun newspapers, began on Monday at the Federal High Court in Abuja with members of the public barred from the proceedings.

The presiding judge, Justice Adeniyi Ademola, had in a ruling, granted the application brought by the Federal Government seeking a secret trial of the suspect.

The judge however ruled that accredited journalists should be allowed to cover the trial.

Umar, the prime suspect, is being tried on a one-count charge of terrorism for allegedly masterminding the April 26, 2012 bombing of SOJ Plaza in Kaduna.

He has however pleaded not guilty.
At a resumed trial on Monday, Justice Ademola after listening to the arguments and submissions of both parties, ruled that persons other than parties in the suit, their legal representatives and accredited members of the press should be excluded from the trial courtroom.

The presiding judge further directed that the names and addresses of prosecution witnesses should be kept as top secret.

"Due to the nature of this case, because it borders on terrorism and national security, I therefore grant prayers one and two of the prosecution counsel specifically seeking an order restraining the public from the trial," Justice Ademola said.

He subsequently ordered the commencement of the trial immediately.

As the trial began, the prosecution counsel, Mr. Simon Labaran, brought in his star witness who was completely masked to testify.

The witness had told the court under examination by Labaran how the accused bombed the SOJ plaza along Kontangora road in Kaduna.

He disclosed that he saw the suspect threw an object like a fire extinguisher on the crowd before it exploded, killing three people in the process.

However, upon cross examination, counsel to the accused , Mr. Nureini Suleiman, tried to puncture the witness' testimony and accused him of giving a hearsay evidence.

Three other witnesses also gave evidence.
Earlier, the prosecutor had filed an application dated Febrauary 18 but filed on February 20, seeking an order of the court excluding the public other than parties involved in the matter and members of the press from the proceedings henceforth.

Labaran said the application was brought pursuant to Sections 34 and 36 (4a and b) of constitution of FRN; section 205 of Criminal Procedure Act and section 31(3) of the Terrorism Prevention Act of 2011.

Opposing the application, counsel to the accused , Sulaiman argued that excluding the public from the trial violated the Constitution.

He said that the Constitution stipulated that court proceedings should be done in full public glare.

Umar is alleged to have driven a white Honda Academy car with registration number AL 306 MKA with improvised explosives devices into the premises of SOJ plaza before detonating the explosives.