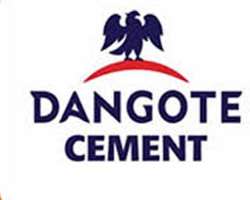 SAN FRANCISCO, April 29, (THEWILL) - The Dangote cement’s massive investment in new capacity has paid off as it recorded upsurge in sales of its locally produced cement to the tune of 10.4 million tonnes in 2012, according to the company’s 2012 financials, presented on the floor of the Nigerian Stock Exchange (NSE), last weekend.

The Group increased its market share steadily during the year, averaging an estimated 57.1 per cent in 2012 compared with the 50.5 per cent achieved in 2011. During the last three months of 2012 the Group’s market share exceeded 60 per cent.

During 2012, the report revealed that Dangote Cement consistently outperformed the growth of the Nigerian cement market, as well as outperforming the Building and Real Estate sectors of the Nigerian economy for much of the year.

The success recorded in the sales of the locally produced cement led to an impressive performance, as it recorded a 14.7 per cent increase in the gross profit for the year.

The shareholders are also in for a good time as the directors recommended that they be paid 300k per share for the reviewed period.

The Chief Executive of Dangote Cement, Devakumar Edwin, in justifying the Company’s good outing said a combination of some managerial strategies adopted in the face of import dumping which led to the glut in the year under review accounted for the impressive performance.

“Dangote Cement achieved a strong increase in revenues and profitability in 2012 despite severe flooding that affected demand and a shortage of gas that affected margins.

“The Group achieved several key objectives in 2012. In the first half of the year we launched 11 million tonnes of new capacity that brought Nigeria to self-sufficiency in cement production. Because of our investments there is no more need for Nigerians to buy foreign cement,” he said.

By the end of 2012 we were preparing to make Nigeria an exporter of cement to neighbouring countries and in the first quarter of 2013 we realised that goal, to the benefit of the Nigerian economy. Soon, we hope to be manufacturing cement in Senegal as we expand into other African countries to supply a basic but profitable commodity that is vital to Africa’s growth.

“Current trading is strong. We estimate that demand for cement in Nigeria increased by almost 16% in the first quarter of 2013 and I am pleased to report that our volumes rose by substantially more than the market's growth rate in the same period. Such a strong start gives us confidence that 2013 will be a good year for Dangote Cement.”

DCP is planning to list on the London Stock Exchange next year. Already the largest cement producer in sub-Saharan Africa, Dangote Cement is more than doubling capacity this year to 21m metric tonnes, and wants to reach 43m tonnes in 2015.

Besides Nigeria, where it has three plants and 70 per cent market share, the company has contracts to construct factories in eight African countries, from Senegal to South Africa to Ethiopia.

The expansion comes at a time of fast growth in Africa, with the IMF forecasting that regional economies will expand by 5.75 per cent this year. This is boosting spending on infrastructure and housing and driving demand for cement.