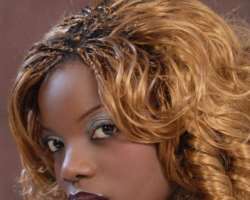 Beautiful actress, Empress Njamah is an amiable lady and fun to talk with. Living her passion in the fashion world, the thespian currently owns a boutique in Abuja called House of Empress. She also owns a Spa and a Saloon among other fortunes. The bundle of talent, who shot into limelight with the movie Girls Hostel, opens up to MERCY MICHAEL in this interview, on why she's still single

As one who is brilliant, beautiful and curvy, why are you still single?

I'm gonna say this alright; I don't care how people take it, the days when marriages were sweet and all beautiful are no more. If you listen to how your parents got married and how those days it was sweet, it's not like that anymore. I've escorted a lot of people into marriages, I won't say I've escorted them out but I've witnessed them come out of it.

So psychologically it's not good for people and then being what we are, a lot of people think because she's this, because she has that I don't think I will be able to handle them. A lot of people can't stand an industrious woman especially if she's doing well. It's the mentality of the people. If a man looks at me, I'm a car freak alright. I have five cars and I'm not doing it because I'm trying to show off, a lot of people don't even know that they are my cars.

And have you met your friend?

Yes, don't judge a book by its cover. People always look at Empress oh she's flashy. She's this and that. Trust me; I'm the simplest person you can ever meet. I'm playful, I'm jovial, and I'm interesting. I'm not blowing my trumpet. But I don't have a dull moment.