I met my husband looking my worst ….Cancer survivor 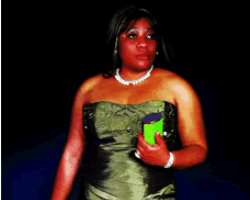 Mrs. Mandy Onakomaiya is a living miracle. At age 34, she was diagnosed of breast cancer in the United States of America where she resides. It was a dream come true for this mother of two as she narrate her traumatic cancer ordeal to Daily Sun in a telephone interview recently.

The soft spoken woman confesses that she is not a stranger to cancer because her mother was diagonised with breast cancer in 1983 at age 44. “ Back then, I didn't understand the lethal nature of the disease as I was only 18. After her initial treatment, the cancer returned and claimed her life in 1990 when we all thought she was getting better after undergoing chemotherapy and mastectomy.” She added that even though her mother died of breast cancer, her case was not hereditary because she was tested for the hereditary gene and it came back inconclusive. In June 2001, she discovered a lump in her left breast and the doctor dropped those dreaded four letter words “You have breast cancer.”

Onakomaiya is a licensed skin therapist in the United States . Talking with this amazon, you wonder how an extremely bubbling and lively woman would have been cut down in her prime by cancer . She revealed that she has to deal with self pity and that sordid experience gingered her to setting up her foundation: 'Sussie Osoba Breast Cancer Foundation in August 2009 after her second diagnosis.'

In her words: “The aim of the foundation is to promote breast cancer awareness in West Africa. She hopes to educate women on the need for constant cancer detection tests. “Most women do not do monthly self breast exams since they cost nothing and could be done in the shower. It was a self exam that found both my cancer lumps, so I am passionate about women who would help themselves fight this disease with early detection. That is why I want to launch the foundation in Nigeria next month. ”

According to her, mammograms did not pick up her cancer lumps initially, they were discovered during a self test before going to her doctor for accurate diagnosis. She tells you that since mammograms are harder to get done in West Africa, her foundation is poised to educate women on the need for self examination and if they discover anything suspicious, they should consult their doctor immediately and get a mammogram asap. In her opinion, early detection is the key to surviving breast cancer.

How did she take the doctor's report at the initial stage?“After the first shock, her resolve was to fight the disease head on. “One day, while I was watching my son, I decided I had every intention of being at his graduation and wedding. The fight was on I told myself.”
Recalling some of her experience during chemotherapy ,she said: “There were moments when I would just lie down and cry, but one can only cry for so long and the situation remains the same. I met my husband Segun Onakomaiya during the darkest period of my life. During chemotherapy, I was looking my worst. I had no hair, was overweight from steroids but we met, became friends and later got married. I believe strongly that had I not had chemotherapy, we would never have met. So, in every cloud, there is a silver lining afterall.”

She however, negated doctor's verdict that after chemotherapy she would not be able to have a child. She had her daughter, Simisola in 2005. “ Despite being told that I would not be able to have any more children due to aggressive chemotherapy, the good Lord decided otherwise as I beat the odds and got pregnant and now Simisola is here with us. We call her our miracle child. After giving birth to my baby, I realized that there was life after cancer and that miracles do happen.”

Onaikomaiya was diagonised the second time with the disease in 2009. This time, she went back to study about the disease and weigh the options of treatment available to her calmly. The doctor said the left breast had to be removed because it was the same breast in which the initial cancer had occurred and she would decide what to do with the right breast which was cancer free according to an MRI scan test.

After discussions with her husband, she chose to go through surgery and be done with mammograms. Her surgery was scheduled for July 1st 2009. “ I had opted for a double mastectomy with immediate reconstruction. Surgery would involve a unique procedure called the DIEP flap where they remove the fat from your abdomen and use it to reconstruct your breasts. The thought of a flat tummy took my anxious mind away from the impending 101/2 hour surgery.” Although the surgery lasted for 16 hours, it was successful. It was the best option afterall because the right breast was already infected. The lump there which mammogram did not detect initially was detected and removed. Now, she is so proud of her figure and living her life to the full.

The whole experience has been harrowing as well as humbling for her. “There is no need for unforgiveness and grudges when life can just go in the twinkle of an eye. Before cancer, I was positive and energetic, after cancer, one becomes vulnerable. It made me realize that life is not in anyone's hands and my heart goes out to every woman going through this ordeal, they should hold on to hope because God is still working miracles.” The need to stay alive and take care of her children gave her the strength to forge ahead during the grueling period of chemotherapy and she admonishes women everywhere to be thankful each day they wake up, live each day to the full and not sweat about any small stuff including cancer.”

The mother of two was born in London and her family returned to Nigeria when she was 10. She attended St. Theresas College Ibadan and Maryland Comprehensive Secondary School, Lagos. She also spent a year in Methodist Girls High School, Yaba, for her A levels and a year at the University of Ife before returning to London. Although she returned to Nigeria for two years and worked at Ecobank, she currently lives in United States where she runs her own spa skincare by Solachi, her brand of skin care products and makeup (solachi cosmetics).