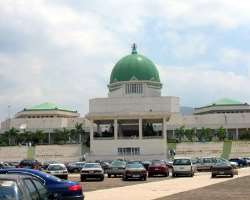 This is even as the group made up of young men and women stormed Abuja and blocked the main entrance to the National Assembly complex as early as 7am preventing lawmakers, staff and visitors from gaining entry into the complex.

They alleged that the minister had fraudulently awarded oil blocks to the detriment of the oil communities and demanded that the National Assembly should investigate the insidious manner under which Oil Mining Leases (OMLs) 4, 26, 30,34,38,41 and 42 were given out by the Minister.

Led by Chief Ayiri Emami, the group asked the National Assembly to cancel the mentioned OMLs and give the opportunity of rights of pre-emptive and/or first refusal to qualified indigenes of the local communities to buy into them.

In their protest letter, which was copied to both President of the Senate and Speaker of the House of Representatives, the communities said:

"We are compelled to bring to the notice of this hallowed Chambers the manner and/or mode, upon which the allocation of the Oil Mining Leases were fraudulently allocated by the Minister of Petroleum Resources, the officials of the Ministry and the Shell Petroleum Development Company Limited.

" Two days before President Goodluck Jonathan dissolved the a Federal Executive Council in 2011, so as to reconstitute it for his new mandate, officials of Nigerian Petroleum Development Company ( NPDC), of which Mrs. Diezani Allison-Madueke was chairman, secretly transferred production rights in four large Oil Blocks, OMLs 26, 30, 34 and 42 to Mr. Jide Omokore's Atlantic Energy Drilling Concept Limited, a company that neither tendered nor bided for the blocks.

" By this deal, 60 percent of NPDC's 55 percent stake of these assets is about five billion barrels, which when calculated with the 2013 crude oil benchmark comes to $380 billion or N58.9 trillion. This figure is exclusive of the 4 Trillion Cubic Feet ( 4 TCF) of gas asset in the blocks valued at $15.72 trillion.

"The game behind this deal is brought sharply into focus by noting the fact that, in OML 26, 30, 34 and 42, Mrs. Diezani Alison- Madueke's no-bid approach via the so- called ' Strategic Alliance Agreement' fetched the Federation Account an upfront cash payment of little more than $50 million as initial entrance fee from Atlantic Energy, while SPDC's open and competitive bidding process, though excluding indigenes of the areas, on the other hand, got $1.3 billion from Heritage Oil Plc for its 45 percent joint beneficiary's stake in the same block."

The communities said that the government and people of Nigeria had been short-changed for instance by the deal on OML 30 as the value of the asset block divested to Atlantic Energy by NPDC should have been higher by at least $750 million.