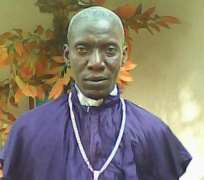 Born in Goho Oueme, Porto-Novo in the Republic of Benin, his unalloyed passion to write about God is beyond a word of mouth. His teachings, however, in the fold is tested and trusted.

Having written a book about how the preacher interprets the Holy Book, he furthered by making God's plan for Saving Mankind known through his latest work. God's Plan for Saving Man was borne out of his zeal for evangelism and fulfilling the teachings of Jesus Christ which says the gospel shall be preached all over the world and the kingdom shall come. He also observed that God's effort to gain the hearts of mankind back to Him having fell from the Garden of Eden made Him to send His only Son, Jesus Christ to die for the remission of our sins, this amongst other things, inspired him to look into the plans of God to save mankind.

The three Chapters with 15-page inspirational and motivational book is a must read for every home. In the chapter one of the book, he talks about the importance of Obedience in the life of every Christian. Disobedience to God's word was the first sin that our fore-father and mother, Adam and Eve committed that brought 'death' to mankind. The chapter two talks about the Consecration of the Israelites as a way of separating them from the people of the world to make them know God in His true form by given them the commandment.

In the last chapter, the author reveals three types of serpents; the first serpent according to him was the one used by Satan to destroy Adam and Eve. The second serpent, the drama that happened at king pharaoh's palace where Moses' rod turned serpent swallowed the magician's serpents of the Pharaohs while the third serpent was the one God Himself used to correct the wrongs of the Israelites when they sinned against Him, Moses, as instructed by God, later made a bronze snake and lifted it on the cross for them to behold and be saved.

The poisonous snake was an attack; the bronze snake was for salvation which represented the salvation of Jesus Christ on the cross. Brethren in Christ, as you all know that Jesus Christ Himself made reference to the serpent lifted on the cross in the wilderness as he would also be put on the cross and for whosoever that dies and looks unto Him can have everlasting life. John 3: 14-16.

This book is recommended for every believer of the Word and I implore you that as you read it your life shall never be the same again. Amen.
Coming soon on the stable of the Levites Family Affair Association, is another chart-buster book entitled The New Zeal of Prayer of Psalms in Yoruba language.

The Levites Family Affair Association is a non-profit making organization poises to stand as a brother's keeper and to protect the dignity of the ministers of God, welfare of the clergy men and to reduce the agony of the Levites' families. To eliminate religious crime due to poverty in the ministries and introduce, indirectly, the standard First-Aid and Personal Safety, to plan for the future of clergymen's family's well being and to assist the helpless ones.
The organization also stands to make adequate provision for the growth of their belief and Biblical education, to care for ourselves when the strength is diminished during old age.