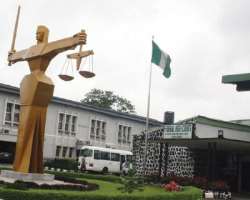 San Francisco Feb 12, (THEWILL) – As predicted by THEWILL after a National Assembly resolution empowered the vice president with full presidential powers, a former minority leader in the House of Representative, Farouk Aliyu has asked a Federal High Court in Abuja to declare that the National Assembly lacked the constitutional powers to pass a resolution allowing vice president Goodluck Jonathan to become acting president.

In an originating summons filed by Mr. Sani Gabbas, the chairman of Jigawa State chapter of the Nigerian Bar Association, the plaintiff wants the court to invalidate the resolution of the National Assembly since such a resolution was "unconstitutional and of no effect."

In the same vein, the plantiff urged the court to direct the “Senate and House of Representatives to cause compliance with Section 145 of the Constitution by waiting for a written declaration to be transmitted by the president before passing any resolution to that effect."

Aliyu also wants the court to grant an order restraining the vice president from "parading himself" as the Acting President and Commander –in–Chief of the Armed Forces of the Federal Republic of Nigeria.

Two other defendants in suit are the vice president and attorney general of the federation and minister of justice.

Aliyu and Gabbas had earlier in the day filed another suit challenging the judgment of a Federal High Court, which gave the executive council a 14-day ultimatum to declare whether Yar'Adua was capable of discharging his duties.

They also asked the court to invalidate the resolution of the executive council, which declared the ailing president capable of discharging the duties of the office of president.