Ekiti must be saved from Fayemi's governance by deceit, credit - Adeyeye 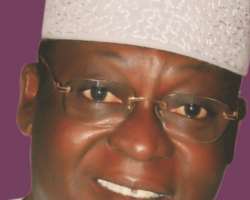 A Peoples Democratic Party (PDP) governorship aspirant in Ekiti State, Prince Dayo Adeyeye has described the Action Congress of Nigeria (ACN) government of Dr. Kayode Fayemi as that of deceit and credit, saying; "his mission is to save Ekiti people from governance by deceit and credit by offering purposeful and people oriented governance, using our First Eleven Priorities."

Kolawole said Prince Adeyeye's decision to throw his hat into the ring and vie for the governorship ticket of the PDP was borne out of his desire to save Ekiti State from governance by deceit and credit.

He said; "We have called you here today to inform you formally that Prince Dayo Adeyeye, a one-time spokesperson of Afenifere, the pan Yoruba Socio-Political organisation, a lawyer and journalist will on Monday, April 29, 2013 formally declare his intention to contest for the office of Governor of Ekiti State in 2014 under the platform of our great party, the Peoples Democratic Party (PDP).

"The event, which by the grace of God will be grand, will begin at the State secretariat of the PDP at 10am where Letter of Intent will be submitted. Our campaign office will be opened formally after the submission of letter of intent at the party secretariat.

"Prince Dayo Adeyeye's decision to throw his hat into the ring and vie for the governorship ticket of our party, the PDP is borne out of our collective desire to save our State, Ekiti from governance by deceit and credit, which the present government in the State represents.

"We believe that Prince Dayo Adeyeye has the capacity to govern Ekiti State responsibly and harness all its human and natural resources without plunging the State into unwarranted debt.

"It is also our belief that the governor Ekiti people desire at this time is one who has the capability to offer real governance, not governance by deceit and credit that is being witnessed in the State now.

"For instance, you all know that for the first time in the history of Ekiti State, our State is being run on credit. Funds that should accrue to the State in the next 20 years are being taken in advance through questionable loans and bond, with the implication that future generations of Ekiti people will be saddled with the task of repaying loans already spent even when they were yet to be born.

"A few days ago, we were told that the dualisation of the 19km Ado-Iworoko-Ifaki road initiated by the Segun Oni-led PDP government had been increased from N7.4bn to N11bn. That road was initially awarded by the Oni's government for N6.3bn and reviewed upward to N7.4bn owing to the change in design so as to remove all the bends at the Iworoko part of the road, which required blasting of rocks and construction of extra drainages.

"Now, the same Action Congress of Nigeria (ACN) government, which claimed that the contractor was overpaid and that the N1.1bn increment by the PDP government was not justified, has increased the contract sum by N3bn (50 percent)!

"Therefore, ours is a mission to save Ekiti people from governance by deceit and offer purposeful and people oriented governance, using our First Eleven Priorities."

While expressing confidence that Adeyeye would emerge as the PDP governorship candidate, Kolawole said; "Let me state it categorically that we are confident that Prince Dayo Adeyeye will fly the PDP flag in the 2014 governorship election. It is an assurance that we have because he has the name, pedigree, credibility and records of performance in public office that no one can question.

"Most importantly, every lover of the PDP both in and outside Ekiti State are of the opinion that whoever will fly the PDP flag in 2014 must be someone, who is not burdened by any negativity that will become a campaign issue during the election.

"Today, Prince Dayo Adeyeye is among the few governorship aspirants in the PDP in Ekiti State that do not have any burden of negative credentials to carry on their shoulders.

"Aside from the credibility of the candidate, it is the general consensus that the Southern Senatorial District of the State, which has never produced the State Governor since 1999 must produce the next governor of the State, and this is not negotiable.

"Therefore, as we get ready for Monday, April 29, 2013 when we will formally begin the journey towards restoring Ekiti back to the people, and making it a place of pride that it should be, we urge you all to collaborate with us in this onerous task."