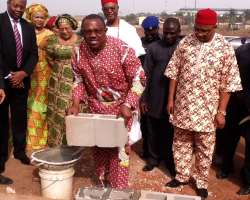 Whatever has a beginning surely has an end. While the end could be accentuated by the coloration of the beginning, the exactness of the summation varies according to the level of compliance of the interacting agents in a consistently changing time. This is the reality of a critique of the state of matter in the eye of an unaffected critic. Governor Peter Obi's distinct political character which was expressed in his early days as Anambra State governor, announced his destination. Though his words were simple and clear, and his actions appreciable and almost predictable, many nonetheless concluded that the plausible phase was soon to yield to the weighty demands of power on the holder. They were sure that the system would soon revert to the status quo ante. In over seven years of Mr. Obi's administration, however, an urbane order has been entrenched, and the disorder of yesteryears confined to a remote memory.

Mr. Peter Obi strode into the centre of the state politics as if it were from the blues. He came without any pedigree that seemed capable of unsettling the hegemony of the dreaded politicians who bestrode the state like colossuses, feasting upon the ruins of their deliberate scheme which promised perpetual disorder and rich harvest for the callous-hearted. Mr. Obi differed from the hounds in his studied silence, clarity of purpose and resolute conviction to salvage the taunted 'God forsaken' state from the savagery it was soaked in.

He was received by the Anambra electorate who readily identified with his human-faced approach to politics. They opted for a civilized polity instead of the nightmares they had been burdened with as governments in the past. Their response was therefore a rejection of their ignoble past and an acceptance of the great future which Mr. Obi represented. Ndi-Anambra therefore delivered Obi whose language sounded soothing to a famished people. This hope was momentarily high-jacked by the vehemence of Chief Obasanjo – the then maximum President of the Federal Republic – and his PDP-INEC co-travelers to maintain the indigent status of the heartland of Ndi-Igbo. This development put all of Mr. Obi to test as he painstakingly secured epochal and unprecedented judgements installing him governor, returning him as governor after a shabby impeachment and sustaining his mandate after an illegal purported election that imposed Dr. Andy Ubah as winner.

With this foregrounding on Mr. Obi's iron-cast determination pursuant to his cause, it was evident that 'a Daniel had come to judgement' to impress good governance without recourse to the whims of any godfathers. This explains Governor Obi's consistency in meeting his commitment to Ndi-Anambra, to whom only his obligation rests. Realizing that effectiveness in governance is dependent on how well the economy of the state is managed, he immediately reduced the cost of governance; which action, apart from conserving state's fund, put a reasonable check on the recklessness attendant to the flow of cheap funds from government coffers to insatiable hangers- on.

Such acts as mentioned above were preparatory to a novel structure of government where, with the institution of the Anambra Integrated Development Strategy, ANIDS, simultaneous development of all the sectors of government's interests are patterned according to the needs of the people vis-a-vis the available resources. Budget and planning therefore came to occupy a frontline role in the affairs of government. ANIDS assumed both the roadmap and the driver of development in Anambra. The success of this brand is identifiable in the unprecedented development projects spanning across all the sectors of the state under Governor Obi's administration.

Whatever area of governance in Anambra State that attracts a critic's interest would surely provide some lesson on a government's zeal for functional service to the people. And as long as one continues to probe, the imposing sights of Anambra State University Teaching Hospital, Chief Jerome Udoji State Secretariat Complex, Professor Kenneth Dike Township Library, the Customary Court of Appeal (all at Awka) would always serve as testimonials to the numerous structures started and completed by the administration of Governor Obi. But for the relevance of repetition in making presentations to reluctant or awkward listeners, there would not be any need emphasizing the obvious gains of Obi's model.

The education, health, roads (particularly rural roads), and value reorientation appear to be the flagship posts of Obi's administration. This might explain the greater vigour the government is putting into these privileged sectors even in the twilight of the administration. The infrastructural uplifts in Onitsha General Hospital, General Hospital, Umueri; General Hospital, Ekwulobia among other government hospitals and health institutions, and the building of brand new hospitals like Ayamelum General Hospital are revolutionary tales. Apart from government-owned health interests, many private and mission hospitals have benefitted from the government's vested interest in health. Our Lady of Lourde's Hospital, Ihiala; Iyi-Enu Hospital, Ogidi; St. Joseph's Hospital, Adazi-Nnukwu; Holy Child Hospital, Onitsha are in the front-row of this group. Against the backdrop of expectations that the Governor should work less in this last lap of its tenure, not a few are astounded by the increasing tempo of work in the various fronts of government interest.

Education and roads compete favourably with health as Obi's administration has continued to deploy huge resources into their enhancement. The government has continued to rebuild decayed infrastructure in schools. It builds libraries, laboratories, and ICT centres in schools. More new buses are continually branded and given to schools to facilitate school administration. A drive around the state readily shows unprecedented efforts of the government to open up the entire state by the construction of good roads. This is in keeping with Governor Obi's conviction that if you provide access to the nooks and crannies of Anambra, every part of the state will be development-prone thereby reducing the increasing pressure on the cities.

History will definitely record Governor Obi as a patriot whose innate love for service and development lent no time for frivolities, even when the epicurean bent of average men beckoned for ingratiation. No; Mr. Obi does not curry a populist's flair – not even when such lure would seem to feather his political nest. And this conviction provokes vilifying retorts from many who otherwise would be indulgent to his take on politics. But Governor Obi has chosen rather to impress his name on the enduring history of the making of a state than in the transient glamour that is fanned by gluttonous sycophants. In this obviously trying time therefore, Ndi-Anambra should look up to their leader to guide them aright. Both the people and the state deserve nothing less.