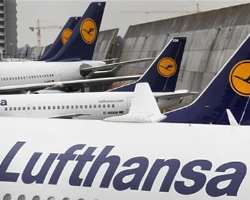 Germany's largest airline Lufthansa (LHAG.DE) was virtually grounded on Monday by a second strike in a month over pay.

The carrier scrapped 1,700 flights, leaving only about 30 operating, after all-day stoppages at Germany's biggest airports, including Frankfurt, Munich, Hamburg and Berlin.

Unlike other strikes over the past couple of years, Lufthansa canceled the majority of its long-haul flights.

"That's 150,000 passengers we are unable to carry today," Lufthansa personnel executive Stefan Lauer said, standing in front of a departure board at Frankfurt showing a swath of canceled flights.

Lufthansa said air traffic would return to normal on Tuesday, with only occasional disruptions expected.

The emergence of smaller trade unions and years of pay restraint have resulted in tough negotiations and more strikes.

"We want to call on the union to end this madness. Germany's transport sector is becoming the laughing stock of Europe," Lauer said.

The high number of cancellations on Monday meant that many passengers had either stayed at home or were not able to fly to the airport, which mostly serves transfer passengers.

Guenter Grabherr, a 54-year-old Austrian travelling with his wife to Tobago on rival airline Condor (TCG.L), said they had expected a German company like Lufthansa to be more reliable. "It's terrible for the passengers who just want to get away," he said.

In Frankfurt, 2,000 Lufthansa employees went on strike from 0300 GMT. They marched through Terminal 1 blowing whistles and waving flags.

Trade union Verdi, which represents 33,000 workers, is asking for a 5.2 percent pay rise and job guarantees. It is pressing the company to improve an offer it has described as "scandalous".

Short warning strikes are a more common tactic in German pay talks and Lufthansa has complained that full-day action is out of proportion.

The airline, in the middle of a restructuring program, last week offered to raise salaries by 1.2 percent from October and by a further 0.5 percent a year later, in a deal with no job guarantees.

Lufthansa estimates that the strike will cost it tens of millions of euros.

Its shares closed up 1.37 percent, prompting traders to speculate that Lufthansa would take a hard line in negotiations and would not to meet the unions' demands.