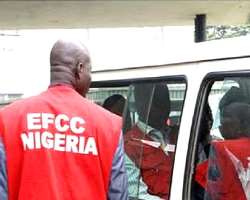 SAN FRANCISCO, April 18, (THEWILL) – The Imo State Commissioner of Finance, Mr. Okafor Chike John and the state’s Accountant General, Mr. Eche Ezenna George have been detained by the Economic and Financial Crimes Commission (EFCC), over a road construction contract awarded to a construction company, J-PROS International Limited where the company was paid the full contract sum of N1.5 billion naira and thereafter abandoned the contract.

The duo were previously detained by the anti-graft agency in January but later freed on bail even though they were not charged to court.

The managing director of J-PROS boss, Mr. Joseph Dina had while defending the abandonment of the Sam Mbakwe road project awarded to his company after collecting the total contract of N1, 150,000,000 and another N200, 000,000 overpayment, claimed that the former Deputy Governor and then Commissioner for Works, Sir Jude Agbaso demanded and received N458M gratification.

Mr. Dina made the charge before the state house of assembly, which eventually impeached Agbaso a few weeks ago, after it concluded investigations into the matter and found the former deputy culpable.

Meanwhile, the Owerri Chief Magistrate court presided by Mrs. Victoria Isiguzo has ordered the police to produce Mr. Dina, to face criminal charges filed against him and his company by Imo state government for fraud and obtaining money from the state government under false pretenses.

The suit as filed by the state Attorney-General and Commissioner, Barr. Soronnadi Njoku on behalf of the state government also seeks to prosecute the contractor for abandoning a major road contract in Owerri capital city after criminally obtaining money in excess of the contract sum.