US PRAISES NIGERIA ON ‘DEMOCRATIC HANDOVER’ 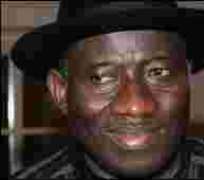 The US has praised Nigeria for this week's handover of power to the deputy leader after two months of political deadlock over the president's health.

“We believe that the principle of democracy have [sic] been served well,” said a statement from the US embassy.

Nigeria is not normally seen as a beacon of democracy – recent elections have been riddled with fraud.

The country was ruled by the military for many years and Mr Yar'Adua became the first elected Nigerian leader to be handed power by another in 2007.

Relations between the US and Nigeria have been fraught in recent months – especially after a young Nigerian man was caught allegedly trying to blow up a plane over the US in December 2009. The best interests of the country and the future of Nigeria have been well served by this action

Robin Sanders
US ambassador to Nigeria
Nigeria criticised the increased security measures taken against its citizens after that incident.

Last month US Secretary of State Hillary Clinton said Nigeria's leaders were partly to blame for the increasing “radicalisation” of young Nigerians.

President Yar'Adua went to Saudi Arabia to be treated for heart problems in November, leading to a political vacuum in Nigeria.

For two months, the government refused to let Mr Jonathan be recognised as acting president.

Although the authorities won a court case that the president was not obliged to hand over power when sick, this week the National Assembly passed a motion recognising Mr Jonathan as the country's interim leader.

US ambassador Robin Sanders praised “the leadership shown by the National Assembly, the Governors' Forum, several Ministers, and the courts in finding a way out of the political impasse”.

“The best interests of the country and the future of Nigeria have been well served by this action.”