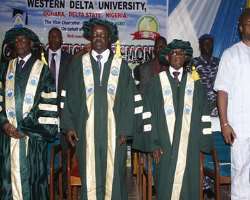 SAN FRANCISCO, April 15, (THEWILL) - Delta State Governor, Dr Emmanuel Uduaghan has said his administration would not discriminate between public and private educational institutions in the quest of ensuring quality education for Deltans.

Speaking on Saturday 13 April 2013 during the first convocation ceremony of Western Delta University, Oghara, (WDU) Delta State, the Governor said his administration was committed to ensuring quality education in both public and private educational institutions in the state in line with the Human Capital Development agenda of his administration.

According to the Governor, proper monitoring of schools in the state were being carried out by government officials while incentives were also, being provided by the Federal and State government agencies to ensure that infrastructure are provided for the institutions and that no stone would be left unturned in ensuring that quality and affordable education was achieved in the state.

“As a state policy, we are also giving automatic scholarships to first class graduating students for their post-graduate studies in any part of the world, among others” the Governor said, adding that many Deltans have benefited from the scheme.

The Governor gave automatic post-graduate scholarships to two best graduating students of WDU which will enable them to study in any part of the world and they will be given N5 million each annually till they attain their doctoral degrees. "We are supporting Novena University financially and are also going to support, Western Delta University financially", the Governor said, reiterating that students should desist from engaging in any form of cultism because "once you go into cultism, you have lost it in life." He praised the Western Delta University for recording zero incidence of cultism since inception five years ago.

The Western Delta University Vice-Chancellor, Prof. Peter G. Hugbo said the school began admitting students six years ago, and that all the school's 15 academic departments are fully accredited by the Nigeria Universities Commission.He recalled that two years ago, the young university hosted the Private Nigerian University Games (PNUGA) and took the second position in the medal table. He therefore charged the 200 ex-students receiving their certificates during Saturday's convocation to think positively and "fly the flag of your University with pride! There is nothing like a new University or an old University, public or private in terms of quality and standards demanded by the regulatory bodies. A University is a University, you should not have a low self esteem of yourself because your University is a private University or it is a young University," the VC said, stating, "I say to you, fly high! And do what is morally and ethically right and just to all."

The convocation ceremonies kicked off on Thursday 11 April 2013 with a classical play, "Aladdin In The Underworld" and continued on Friday when Prof. Julius Ihonvbere, the Secretary to Edo State Government delivered the Convocation lecture; "Private Universities and National Development". He charged the Western Delta University, Oghara, and indeed all private universities to "focus on leadership with a high capacity for visioning" as "this is grossly weak or lacking in the country today. Leaders are afraid to take decisions, lack commitment, compassion, discipline, creativity, courage and the ability to listen to their communities and constituencies.

"Your students must learn to take charge and develop a strong desire to succeed. The must be taught that dialogue, shared values, and cooperation are superior to violence and distractions and grandstanding".