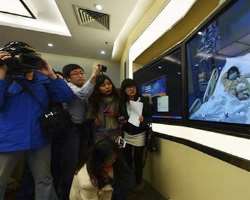 Two people in the central Chinese province of Henan have been infected by a new strain of avian influenza, the first cases found in the region, while another four cases in eastern Zhejiang province brought the total number nationwide to 55.

One of the Henan victims, a 34-year old man in the city of Kaifeng, is now critically ill in hospital, while the other, a 65-year old farmer from Zhoukou, is stable. The two cases do not appear to be connected.

A total of 19 people in close contact with the two new victims were under observation but had shown no signs of infection, Xinhua said.

Another four cases had been confirmed in eastern Zhejiang, state news agency Xinhua said on Sunday, bringing the total number in the province to 15. Xinhua said none of the 483 people in close contact with the victims has presented any symptoms.

Three cases have now been reported outside the original clusters in eastern China, including one in the capital Beijing, but there is nothing out of the ordinary so far, the China representative of the World Health Organization said.

"There's no way to predict how it'll spread but it's not surprising if we have new cases in different places like we do in Beijing," Michael O'Leary told reporters.

On Saturday, the China Centre for Disease Control and Prevention confirmed that a seven year-old child in the capital of Beijing had been infected by the H7N9 bird flu virus, the first case to be reported outside of eastern China, where the new strain emerged last month.

The child's parents work in the poultry trade.
Investigators are trying to ascertain the source amid fears that it could cause a deadly pandemic similar to Severe Acute Respiratory Syndrome (SARS) in 2003, which killed about one in 10 of the 8,000 people it infected worldwide.

China has been anxious to avoid a repeat of the panic of 2003 by promising total transparency, and O'Leary said his organization has been "very pleased" about the way information was being shared.

China's health ministry said on Saturday that there is still no indication of human-to-human transmission of the virus, which has already killed 11 people in Shanghai and the provinces of Zhejiang, Jiangsu and Anhui.

"That's a key factor in this situation," said O'Leary. "As far as we know, all the cases are individually infected in a sporadic and not connected way."

The husband of a H7N9 victim in Shanghai was recently infected, but O'Leary said there was no cause for alarm.