PDP AND THE ANENIH APPROACH TO RECONCILIATION 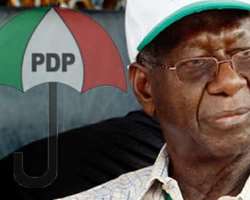 CHIEF TONY ANENI, CHAIRMAN OF THE PDP BOARD OF TRUSTEES (BOT)
Listen to article

In any human group there are bound to be conflicts and disagreements, more so in a democratic setting where there is freedom of expression. Although political parties are formed on the basis of common political aspirations and goals, the individuals still hold divergent views on how the party goals are to be pursued. The larger the party is, the greater the tendency towards internal disagreements. This has been the case with the Peoples Democratic Party (PDP) since its formation in 1998.

The PDP has grown to become, not only the largest political party in Africa, but also the only truly national party in Nigeria, with presence in virtually every ward of the 774 Local Government Areas of the Country. In fact, a majority of those who now constitute the opposition parties-whether ACN, ANPP, CPC, APGA, Labour, etc-were initially members of the PDP.

Although the size of the PDP may have accounted for the increasing number of conflicts within the party, other factors have also played a major role, especially during the Olusegun Obasanjo years (1999-2007). During this period, Obasanjo’s leadership style hardly allowed for any internal democracy to reign within the PDP. It was an era of arbitrariness and imposition of candidates, a period when members were either expelled without just cause or deliberately frustrated out of the party. That was how many founding fathers of the PDP were estranged from the party and forced to go to other parties. Unfortunately, there were no serious and genuine efforts at reconciliation during that period; indeed, none until much later when the late President Umaru Musa Yar’ Adua set up the Alex Ekwueme-led Reconciliation Committee to woo back aggrieved members of the party who had been driven away by the Obasanjo administration.

In spite of the comprehensive report submitted by Ekwueme’s Committee, the situation did not improve markedly before the election of President Goodluck Ebele Jonathan in 2011. On the contrary, the situation deteriorated as a result of political intrigues, backstabbing and manipulations during the conduct of party congresses and the process of emergence, in March 2012, of the current National Working Committee (NWC) members, especially the National Chairman, Alhaji Bamanga Tukur and the former National Secretary, Chief Olagunsoye Oyinlola. Since then, the PDP leadership has been plunged into what could be described as a prolonged crisis of “irreconcilable differences”, with some governors elected on the platform of the party insisting on the removal of the National Chairman. The situation is compounded by widespread problems of discipline among members in almost all the zonal and state chapters of the party.

That is how serious the PDP crisis has been. And that, sadly, was the situation inherited by Chief Tony Anenih when he was elected Chairman of the party’s Board of Trustees (BoT) on Monday, 25th of February, 2013. Creating harmony out of this very fractious condition of the party is, indeed, a tall order which the BoT members have assigned to a man they believe to be equal to the task.

As soon as Anenih assumed office, he pledged that his primary goal was to reconcile members of the party, especially the aggrieved ones who still remain, but only grudgingly, in the party, and to woo back those who have been frustrated out of it. For this purpose, members of the BoT, such as Senator Barnabas Gemade, Col. Ahmadu Ali (retd), Dr. Bello Haliru Mohammed, Alhaji Abubakar Baraje, Prof. Jerry Gana, Alhaji Shuaibu Oyedokun, Chief Ebenezer Babatope, Senator Jim Nwobodo and Alhaji Wali Jibrin, among others, immediately embarked on a reconciliation duty tour which has, so far, taken the team to Lagos, Akwa Ibom, Kogi, Kaduna, Kano, Jigawa Niger, Sokoto, Rivers and Benue States, with many others to follow.

That Anenih’s efforts are already yielding positive results in all the States so far visited by his team should not be surprising– and that is not our concern here. What should interest us are his qualities, unique style and package of strategies being deployed by this seasoned conciliator.

The first prerequisite for a successful mediation is a comprehensive understanding of the situation as it exists. Anenih knows politics in Nigeria in and out-the various sectional interests, movements and possible points of agitation in nearly all the remote parts of the country. He also knows the major personalities and political figures from different parts of the federation. Equipped with such knowledge, it is easy for him to understand and empathize with the positions of most of the aggrieved individuals or groups of persons.

In conflict resolution, the integrity of the mediator matters. He or she has to be a person to trust and someone whose word means what it says. Members of the PDP and, indeed, Nigerians who know Anenih well can vow that he would stand by the truth, no matter whose ox is gored. This is a manifestation of the man’s sense of justice and personal morality. It is for this quality that he is accepted across the country as the conciliator per excellence.

Confidence building is an essential ingredient of peace mediation and Anenih’s first strategy has always been to assure an aggrieved member, not only of his importance within the party, but also that the party has his or her interest at heart. It was, therefore, not surprising when the Nigerian Tribune (26th March, 2013) carried the headline “Anenih begs Lamido not to dump PDP.”

The report, so sensationally couched by Tribune was on the visit of the BoT team, on Monday 25th March 2013, to Kano and Jigawa States, two of the most populous States in the North, during which Anenih described Governors Rabiu Musa Kwankwaso and Sule Lamido as important members of the PDP family, and appealed to them not to leave the party. It is important to note that most of these discussions during the BoT visits had to be conducted behind-closed-doors and not in the glare of the media. This is because Anenih believes that every aggrieved member of the party must be given the opportunity to express his or her views frankly and honestly, that being the most effective way of achieving genuine reconciliation.

Anenih may not have studied diplomacy formally but he seems to know what to say, when and how, as the occasion demands. In Minna, for instance, although the politically sensitive issue of zoning for the presidential election of 2015 was not raised, Anenih, knowing the views of his host, Governor Babangida Aliyu, on zoning in 2015, volunteered the statement that “the Party has not reached any definite decision on the matter” and that “when the time comes there will be full consultation within the party, as it is not a matter to be discussed at the market place.” (Thisday, 27th March, 2013 P.8) He assured Governor Aliyu that he (Aliyu) would be one of those to take this important decision when the time comes. And, like he did with Lamido, Anenih passionately pleaded with Governor Aliyu not to abandon the PDP family. What a disarming strategy!

Feedbacks from the States so far visited by the BoT team indicate that Anenih’s reconciliation mission is already recording success. Indeed, the National Publicity Secretary of the PDP, Olisa Metuh, has commended Anenih, saying “the party observed that in the few weeks since his election, Anenih had lived up to his reputation as a consensus builder and a strong believer in the supremacy of the party.” (Thisday, Wednesday 27th March, 2013. P.8)

Before the visits of the BoT team, there were media speculations that, at least, eight governors were planning to dump the PDP. However, during the visits, this rumour was vehemently denied by virtually all the governors who, one after the other, assured the BoT of their full loyalty to the party. When, for instance, Anenih confronted Governor Aliyu of Niger State about the rumour of his plan to dump the PDP, Aliyu’s response was simply that he had no such plan except he was pushed out of the party. Of course, Anenih assured the governor that the party would not push anybody out.

In the end, the success of Anenih’s approach to reconciliation derives from the strategy of confidence building in which he strives to establish trust between the aggrieved members and the party leadership. That trust cannot be built unless the mediator is known to be a man of integrity. Also, confidence building cannot be conducted on the pages of newspapers or television screens. Indeed, we may never know how many political crises Anenih might have resolved from behind the scene.

The Anenih package of reconciliation is built on truth, justice and fairness to all, in the overall interest of the party. Its underlying philosophy is that every member of the party is important in his or her own right and must be so treated. In addition to that, Anenih has a unique personal philosophy not common among politicians, which is that “once one is a political associate, he or she is always a political associate.” That way, his political friends would desert him at will and return at will, and believe it or not, Anenih is always ready to welcome them back. This is the charisma that he is deploying in the current effort to achieve genuine reconciliation in the party.