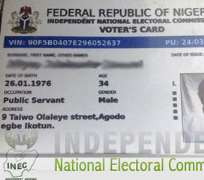 SAN FRANCISCO, April 10, (THEWILL) - The Federal Government, Wednesday, approved the sum of N2,117, 500 for the printing of permanent voter's card in preparations for the 2015 general poll.

The printing of the cards, which had been awarded to ACT Technologies Limited, is expected to be completed withn six months.

Disclosing this at the close of the weekly Federal Executive Council (FEC) meeting, in a chat with State House correspondents in Abuja, Minister of Information, Mr. Labaran Maku, said the approved sum will cover the production of 33,500 voter's cards that will be utilised as national identity card for future elections.

He disclosed that FEC also approved the National Vocational Qualification Framework (NVQF), intended to address high level of unemployment, which will also be made part of the scheme of service of the federation to integrate people with requisite skills into the system.

Maku said a permanent identity card that would last ten years is in the offing and the next voter's identity card to be issued will be used for the 2015 elections.

A working document of the council’s meeting revealed that after the 2011 election, the Independent National Electoral Commission (INEC) sought to print 73,500,000 permanent voter's’ cards to replace the ad-hoc ones used for the election.

According to document, “the Commission printed 40,000,000 permanent cards in 2011 for the first phase of the project which is in progress,” culminating in the second phase in which the remaining 33,500,000 cards will be produced.

“After deliberation, council approved the contract for the second phase of the printing of 31,500,000 permanent voter's’ cards at the rate of N65:00 per card,” the document stated.

On the NVQF, the Minister of Education, Prof. Ruqayyatu Rufa’I , said with its approval and integration into the mainstream civil service, itinerary skilled persons have chances to undergo trade skills test in six different levels that will qualify them for different levels of education.

Another working document of the council meeting further explained the desiderata of the NQVF.

“As Nigeria aspires to become a major player in the world economy, the place of skilled and competent workforce cannot be underplayed.

“A competent workforce is necessary for higher productivity and effective implementation of development projects is a building block for the economy.

“The phenomenon of vocational skills framework has been embraced by many countries as a vital scheme to enhance development of competent workforce and ensure that qualifications for occupations are flexible, transparent and accountable.

“As Nigeria transforms to one of the world’s major economies, the greatest asset needed is a competent workforce, which the council believes could be best realised under NVQF,” the document stated further.