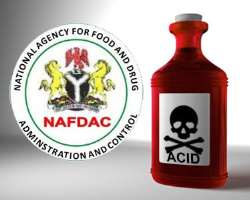 SAN FRANCISCO, April 09, (THEWILL) - The National Agency for Foods and Drugs Administration and Control (NAFDAC) has raised the alarm over the use of acid to settle petty scores, especially by estranged lovers.

NAFDAC has also enlisted National Youth Service Corps (NYSC) members as foot soldiers for the campaign against the use of bleaching creams and counterfeit drugs.

Raising the alarm on Tuesday in Ibadan, the Oyo State capital , was the Head of the agency in the state, Rev. Benjamin Haruna, at the inauguration of the NYSC Development Group. He lamented that hardly would a month pass without reports of people being bathed with acid by their embattled ex-lovers.

He disclosed that NAFDAC had resolved to strengthen its activities in monitoring the use of acid as a means of reducing the abuse of the substance.


Haruna said crime had risen because chemical marketers are diverting acids meant for industrial use, research and teaching to people who ordinarily should have no business with acid.

Meanwhile, NAFDAC said it had enlisted NYSC members to act as foot soldiers for the campaign against the use of bleaching creams and counterfeit drugs.

“Such unscrupulous people use acid to produce or refine hard drugs, produce explosives or bath their enemies. We have therefore strengthened our activities in monitoring the use of acid.

"We advise people to confront, raise alarm or report when they see neighbours carry liquid in glass bottles especially amber colour ones, because it is not likely to be water," he said.

In her contribution, the South West Zonal Coordinator, Mrs. Omosola Osibanjo, said the youths would go to cities and rural areas to create awareness.

She advised that bleaching creams should be avoided because the chemical contents would not only destroy the skin, but also destroy the organs targeting the liver.

She enjoined Nigerians to stop buying drugs from hawkers, saying if they did not buy, they would stop selling.

Earlier, the agency had convened two stakeholders meetings on ensuring that ethical drugs were obtained strictly on prescription and the deliberations were fruitful.