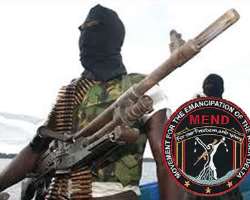 SAN FRANCISCO, April 07, (THEWILL) – The proscribed Niger Delta militant group, Movement for Emancipation of Niger Delta (MEND), Sunday, claimed responsibility for the weekend attack on a group of policemen in the creek of Bayelsa State during which 15 of the policemen were killed.


In a statement issued by its spokesman, Gbomo Jomo, on Sunday, MEND described the attack as a warning to the Joint Task Force (JTF), codenamed Operation Pulo Shield, which had earlier dismissed its threat of launching a fight it codenamed, "Hurricane Exodus”.


"For dismissing Hurricane Exodus as an “empty threat” by the Nigerian security forces, heavily armed fighters from the Movement for the Emancipation of the Niger Delta (M.E.N.D), at about 17:00 Hrs., Saturday 06, April 2013, intercepted and engaged government security forces in a fierce gunfight lasting over forty (40) minutes at Azuzama, Southern Ijaw, Bayelsa State, Nigeria.

"The clash which happened in the river left over fifteen (15) security forces dead as we also lost two (2) of our fighters in the battle.

"We hope this encounter will serve as a lesson to the Joint Task Force (JTF) from making careless utterances that cannot be backed as we remain resolute in our resumption of hostilities.

"All oil companies and the public are advised to ignore the false sense of security been peddled by the JTF as well as the false comments from a “Comrade Azizi”, who claims to be in the spokesman for the group.

"This person is not known to MEND, does not speak for MEND and his utterances and style do not reflect our plans and actions,” the group said in the statement.

The confirmation by MEND came as the JTF said it had placed all its personnel in the Niger Delta on red alert , warning that it wouldn't tolerate any form of lawlessness from anybody or the gang of retrogrades parading themselves as MEND.

JTF spokesman, Lit Col Nwachukwu Onyeama, in a statement, said some group of policemen and not JTF soldiers heading to Oporoma in Ijaw South LGA of Bayelsa State for a burial of someone nicknamed "Young Shall Grow" were attacked by assailants when the boat they boarded developed a fault on the waterways.

He said that following this, the task force troop came to the rescue of the survivors.

"Our marine and air assets have also been mobilised and we have intensified our patrols to dominate both land and waterways to check mate any assailant.

" We will not permit any lawlessness that would jeopardise the peace in the region. We again call on all peace loving and progressive Niger Deltans to dissociate themselves, their communities and leadership from this gang of retrogrades parading themselves as MEND, “ the statement said.

It would be recalled that suspected militants believed to be those aggrieved with their former warlord, 'General' Young Shall Grow’ had in the early hours of Saturday sent 13 policemen to their early graves in a horrific manner in Azuzuama in Southern Ijaw Local Government Area of Bayelsa State thus making good their threat to resume sporadic attacks in retaliation of the jail sentence recently handed to its leader, Henry Okah, in South Africa.

The Bayelsa killings came few days after MEND threatened to renewed hostilities in the region.

The unfortunate policemen in Bayelsa were said to have been gruesomely murdered as they were shot at close range while on an official assignment at the burial ceremony of the father of a former militant leader who is currently a senior special adviser on Marine Waterways to the Bayelsa State governor.

Confirming the killings, the state Commissioner of Police, Kingsley Omire, who addressed journalists on the matter, said 15 policemen were on official assignment before they were ambushed by the ex-militants.

He, however, denied that 13 members were killed, saying only four policemen were rescued while 11 were still missing.