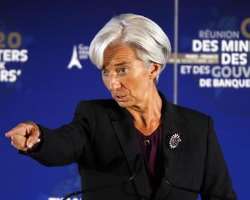 The head of the International Monetary Fund hailed Japan's unprecedented monetary policy boost this week as a welcome support for a world economy that she said has improved from a year ago.

Christine Lagarde said on Sunday the radical $1.4 trillion stimulus from the Bank of Japan (BoJ) would help strengthen the advanced economies, saying growth in countries such as the United States was gaining speed.

But without referring specifically to Japan, Lagarde warned policymakers against thinking that super-loose monetary policy alone could do the heavy lifting in reviving economies, when growth may instead be stifled by unhealthy private and public finances.

"Monetary policies, including unconventional measures, have helped prop up the advanced economies, and in turn, global growth," Christine Lagarde told a forum in south China.

"The reforms just announced by the Bank of Japan are another welcome step in this direction," she said. "There is, however, a limit to how effectively monetary policy can continue to shoulder the lion's share of this effort."

Central banks still need to heed broken balance sheets that impede lending and plan for and guard against uncertainties arising from any policy change, the IMF chief said.

Japan stunned investors on Thursday by unleashing the world's most intense burst of monetary stimulus, which will pump $1.4 trillion into its economy in under two years. It hopes the shock therapy will end two decades of stagnation.

But the move is a huge gamble. It heavily exposes the BoJ to Japan's mountain of public debt and carries the potential for big losses if inflation spikes and investors lose faith in its viability.

Japan's government debt, at twice the size of its $5 trillion economy, is proportionally the highest among developed nations.

Lagarde said fiscal problems in developed nations such as Japan and the United States marred the global economic recovery and contrasted with emerging economies, where a broadening rebound is brightening the outlook.

ENVIABLE
Lagarde said the IMF expected Asian economies to grow by nearly 6 percent this year, "an enviable performance by any measure", as resilient domestic demand and accommodative policies power the region.

She said the impressive growth rate is customary for Asia, which has accounted for two-thirds of global growth in the last five years since the financial crisis struck.

Asia's buoyancy has rubbed off on the rest of the world.

"A substantial portion of the global economy looks better today than it did last year," Lagarde said. "And we are beginning to see momentum pick up in the United States."

In the euro zone, however, she said debt problems are weighing on growth and dragging out a recession.

Lagarde said the main task for the currency zone right now is to push for a banking union, a plan that is meant to put an end to the euro zone's debt troubles by severing the link between sovereign borrowers and banks.

Last month, however, Dutch Finance Minister Jeroen Dijsselbloem said European aid for troubled banks is a last resort, which raised doubts about the plan for a banking union.

Dijsselbloem made the comments after a rescue program was agreed for Cyprus that imposed steep losses on depositors, leading to suggestions that the Cypriot deal could serve as a precedent for future bank bailouts in the bloc.

Lagarde said Cyprus was not a model for the rest but that the pecking order for investors to absorb losses including depositors must be respected.

"When a financial institution goes under, a resolution process has to take place that will constantly be shouldered by taxpayers, either in the country or in the region or in the world," she said.