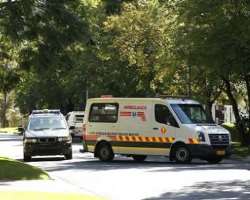 Former South African president Nelson Mandela left hospital on Saturday after more than a week of treatment of pneumonia that raised global concern about the health of the 94-year-old anti-apartheid leader.

"(He) has been discharged from hospital today ... following a sustained and gradual improvement in his general condition," the South African presidency said in a statement.

A military ambulance pulled into Mandela's spacious Johannesburg home before the statement was released. The presidency said Mandela, who spent about 10 days in hospital, would receive further medical care at his residence.

This was the third health scare in four months for the Nobel Peace Prize laureate, who became South Africa's first black president in 1994 and who is a global symbol of tolerance and the struggle for equality.

He was in hospital briefly in early March for a check-up and was hospitalized in December for nearly three weeks with a lung infection and after surgery to remove gallstones.

Mandela stepped down as president in 1999 and has not been politically active for a decade. But he is still revered at home and abroad for leading the long campaign against apartheid and then championing racial reconciliation while in office.

His lung problems date from when he contracted tuberculosis as a political prisoner. He spent 27 years on Robben Island and in other jails for trying to oust the white-minority government.

Mandela's last notable public appearance was at the final of the soccer World Cup in 2010. Since then, he has stayed at his home in Johannesburg or in Qunu, the remote village where he was born in the impoverished province of Eastern Cape.

REMINDER OF MORTALITY
For several years South Africans have watched Mandela's health gradually deteriorate, reminding them of the mortality of the man whose face adorns the nation's new banknotes.

As he has receded from public life, critics say his ruling African National Congress (ANC) has lost the moral compass he bequeathed it when he stepped down as president in 1999.

"There are those in South Africa who argue that the ANC, especially under the leadership of current President Jacob Zuma, has deviated from Mandela's principles and values," said political analyst Aubrey Matshiqi.

Under such leaders as Mandela, Walter Sisulu and Oliver Tambo, the ANC gained international respect as it battled white rule.

Once the yoke of apartheid was thrown off in 1994, it began governing South Africa in a blaze of goodwill from world leaders who viewed it as a beacon for a troubled continent and world.

Almost two decades later, this image has dimmed as ANC leaders have been accused of indulging in the spoils of office, squandering mineral resources and engaging in power struggles.

Mandela was criticized for not doing enough to prevent an HIV/AIDS epidemic and for making political compromises in the transition from apartheid that have kept the black majority from benefiting significantly from South Africa's mineral wealth.

The country has some of the world's highest rates of income inequality. Nearly two decades after the end of apartheid, the average white household earns about six times more than the average black household, according to government data.

But Mandela's achievement in leading South Africa out of apartheid is seen as eclipsing any criticism.

"There was no one else in 1994 who could have pulled off what he did and kept the country together and kept those forces at bay that would have plunged South Africa into a racial, civil war," analyst Matshiqi said.