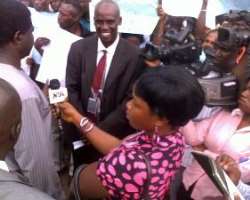 Having Now received the official result from INEC, we have carefully analysed same and come to the painful conclusion that the announced winner did not meet the mandatory requirement as provided in section 179 (2) (a) (b) of the constitution, and as such should not have been declared winner."

That was the AC candidate in the just concluded governorship election in Anambra state, Dr Chris Ngige speaking with journalists yesterday at his campaign office at Awka.

Ngige who had earlier last week rejected the result announced by INEC declaring Governor Obi re-elected sounded a quick notice of heading to the election tribunal any time from now. He quoted the mandatory constitutional requirement outlined as follows: "that a candidate for an election to the office of governor of a state shall be deemed to have been duly elected where, there be two or more candidates –

i. he has the highest number of votes cast ate the election, and he has not less that one quarter of all the votes cast in each of at least two third of all the council areas in the state.

Continuing, he noted, “I want to alert the people of Anambra state, Nigeria and the world at large that INEC has once again engaged in a severe breech of our constitution as it pertains to electoral matters. I had highlighted the issue of the disenfranchisement of over 83 % of Anambra citizens, especially in my areas of voting strength”.

Ngige also recalled the issue of violence, arrest of AC agents, ballot box snatching and stuffing as well as monetary inducement of voters at the polling areas on the election day, which he insisted to drawing the attention of INEC chairman of these lapses.

According to him, “he (chairman) advised that I put them in writing asubmit to the state Resident Electoral Commissioner, REC before the final results are announced.

“We immediately put up our petitions to withhold results in those areas, namely: Anaocha, Ogbaru, Onitsha North and South…. However, the REC proceeded to announce a winner.”

He noted, “having secured the next highest number of votes and fulfilling section 179 (3) (a) (b) as stated earlier, I should be going for second election as stipulated in the constitution, and because of this travesty meted on me and Anambra electorate, I have decided to head to the election tribunal for a redress”.

Ngige refused to join issues with the PDP candidate for the election who sources said has made an about face in his earlier resolve of not contesting Obi's victory by starting to collect data with the intent of heading to court.

"I am the ASC candidate, and I can not speak for the PDP candidate. He hurriedly congratulated Obi at a time when we were busy collating documents to know the extent of damage done by INEC. We are not working with him, if he is going to court, he is doing so on his own."