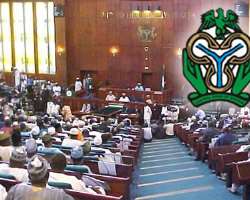 ...No, it’s a lie...CBN
ABUJA, April 04, (THEWILL) – The planned amendment of Banking and Other Financial Institutions Act ( BOFIA) may have hit the rocks as the leadership of the House of Representatives is alleged to have collected undisclosed sums of money from the Central Bank of Nigeria (CBN) to prevent the bill from being passed.

The bill also seeks an upward review of the outdated penalties for various offenses in the banking sector.

The repeal and re-enactment of the BOFIA bill is also aimed at improving regulatory regime as well as protect depositors from losses in situations where banks fail.

THEWILL gathered that on February 18, the BOFIA amendment Act was to be tabled for consideration at the Committee of the Whole, one of the presiding officers allegedly sent a copy of the bill to the CBN governor, Mallam Sanusi Lamido Sanusi, for him to make inputs and alter all provisions seen to be offensive to the CBN..

Again, on February 19 when the bill was to be considered, the Deputy Speaker, Emeka Ihedioha and the Chairman of the House Committee on Banking and Currency, Mr. Chukwudi Jones Onyereri , were said to have connived and allegedly frustrated debate on the report forcing the sponsor, Hon. Betty Apiafi, to storm out of the chambers in anger and frustration.

Since then, only three of the clauses were said to have been considered in the bill. Even then, it was only when the speaker, Hon. Aminu Waziri Tambuwal, presided over the plenary.

Our source further clarified that the speaker is not aware of the 'unholy deal' between some members of his leadership and the CBN to kill the BOFIA Amendment Act.

"In fact, since the three clauses were taken, the deputy speaker and his men have consistently prevented the bill from being considered, Even when the rules and business committee lists the bill, it is always last on the order paper hence it is never taken,” the source said.

The deputy speaker, Ihedioha, is said to be the one fronting for the CBN as he is said to have consistently refused to mention the bill when it is listed in line with the alleged promise to the CBN that it would never see the light of day in the House.

But when contacted to comment on the allegations, chief press secretary to the deputy speaker, Oke Epia, said he could not comment on the matter, saying the Chairman of the House Committee on Banking and Currency, Jones Chukwudi Onyereri , was the rightful person to address the matter.

In his reaction, Onyereri said the allegations were untrue since according to him, the new BOFIA bill, " is the best thing that has happened to the country," maintaining that no one would be allowed to truncate it. He further stated that the bill is at the Committee of the Whole for consideration and that at that level, "no one, living or dead, not even Jones or CBN can stop it."

He also commended the sponsor of the bill, Hon. Betty Apiafi, for doing a wonderful job. He however advised Nigerians to be patient since the House had started work on the bill concluding that at the end of the day, " the country will applaud the BOFIA we will present."

Also denying the allegations, the CBN Spokesman, Ugochukwu Okoroafor, said the bill is a public document and could be in anyone's possession as "there are many copies flying around."

Ugochukwu Okoroafor, the spokesman of the CBN, said people who are insinuating that the CBN is stalling the BOFIA Amendment Act "are mischievous."

According to him,"The bill is a public document anyway, and there are many copies flying around . People saying that CBN is trying to stall the process are mischievous. When we come to public hearing, CBN makes presentations.

"Amendment of BOFIA is not a CBN issue but what do we want as a country, is what we have different from other countries, The BOFIA is not such a big deal. What if Sanusi steps down, will the bill be stepped down?

"The bill might send wrong message. In a country where people know that the laws can be fiddled with, it will drive away foreign investors. Why should they hid it from CBN, we proposed some bills ourselves."