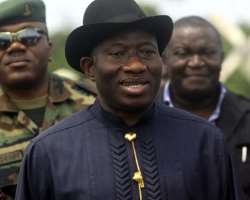 SAN FRANCISCO, April 03, (THEWILL) – President Goodluck Jonathan, Wednesday, called off a planned trip to Sokoto without giving any reason for the cancellation.

The president had been billed to visit the state hours before the Chairman of the Board of Trustees (BoT) of the ruling People’s Democratic Party (PDP), Tony Anenih, in continuation of the board’s visit to PDP-controlled states to reconcile aggrieved members of the party.

Anenih had met privately with the president at the Presidential Villa ,Tuesday afternoon and night, to perfect the itinerary for the Wednesday trip .

Two teams of reconnaissance and an advance party scheduled to depart for Sokoto yesterday morning were said to have been quietly dispersed after they had assembled with intention of making the journey.

A security source however said the cancellation may not be unconnected with security reports.

“ It is likely that intelligence reports emanating from Sokoto are not very encouraging, so there is no way the president will shun such advise and embark on the trip,” the source said.

The source also said that the president who had just returned from a tour of three states during the Easter break and was expected to meet the leadership of the Arewa Consultative Forum (ACF) Wednesday night may have decided to call off the trip on his own to enable him conserve his energy after a strenuous week.

The ACF’s meeting with the president is geared towards finding lasting solution to the violence in the Northern region occasioned by the activities of the dreaded Boko Haram sect.

The president’s refusal to capitulate to the requests of key northern leaders including the Sultan of Sokoto, His Eminence Sa’ad Abubakar III and stakeholders in Borno and Yobe States to grant amnesty to members of Boko Haram, had irked many northerners who expressed strong feelings that his attitude does not encourage a peaceful resolution of the problem.

Planning for a similar meeting by the president to Borno and Yobe States, though planned several months ahead did not materialise until after 11 governors under the aegis of the All Progressives Congress (APC) converged in Maiduguri, Borno State.

It was speculated in some quarters that security reports about the volatile condition in the two states in addition to lack of radar equipment at the Maiduguri airport delayed the president visit then.