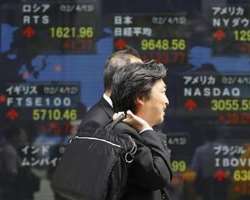 Asian shares and the euro fell on Monday in choppy trade with exchanges closed in several Asian markets, including Australia and Hong Kong, as well as in Europe for Easter holidays.

Investors will look for market direction from Markit's U.S. final manufacturing PMI for March and the Institute for Supply Management's March manufacturing index due later in the session.


Analysts have said a growth trend in the U.S. is crucial to maintain global risk-positive sentiment. It is the outperformance in U.S. equities on solid U.S. economic reports that has helped drive global shares and other risk asset prices generally higher in the first quarter.

From Asia, surveys showed that stronger domestic demand helped China's factory activity to rebound in March, with new orders up sharply in a sign that the underlying economic recovery is strong enough to weather risks from patchy export performance.

The official manufacturing purchasing managers index (PMI) for March showed China's factory output ran at its fastest in 11 months at a reading of 50.9, below 52.0 forecasts by economists but still signaling economic recovery may be accelerating.

Oil markets focused on the official PMI missing market projections as raising concerns about easing demand, sending U.S. crude futures down 0.5 percent to $96.78 a barrel and Brent down 0.3 percent to $109.66.

"The data came in below market expectations, which could indicate that oil demand growth may not expand quite as quickly as we would like it to," said Carl Larry, president of Oil Outlooks and Opinion, based in Houston.

"But China's still growing and that continues to be an underlying support factor long-term for the market. Whether they are at 6 percent or 7 percent they are growing."

The MSCI's broadest index of Asia-Pacific shares outside Japan was down 0.2 percent, with South Korean shares falling 0.5 percent and Shanghai easing 0.1 percent. The pan-Asian index ended the first quarter with the smallest gain in three quarters with a 1.4 percent rise, after reaching a 1-1/2-year high in February.

"While the rebound of sub-indices appears broad-based, it is still much lower than the average gain seen in past years," ANZ said in a research note on the Chinese PMI data.

In Japan, investors kicked off the country's new fiscal year by taking profits in Japanese stocks, sending the Nikkei stock average down 1.4 percent to a two-week low after it had posted its best quarterly performance in nearly four years.

Expectations for strong monetary stimulus measures to be announced by the Bank of Japan at its meeting on April 3-4 under the new leadership have supported Japanese equities and underpinned the dollar against the yen.

The dollar was likely to be choppy leading up to the BOJ meeting, with speculators looking to book profits from the rally of the past several months, regardless of the gathering's outcome.

"The cap on dollar/yen for now is removed, with repatriation flows related to Japan's fiscal year-end completed at the end of March, so speculators will be looking to build long dollar/yen positions leading up to the BOJ meeting," said Yuji Saito, director of foreign exchange at Credit Agricole in Tokyo, adding that the euro remained top-heavy.

The euro was pressured with Italy struggling to break a political stalemate lasting more than a month after elections and fallout from the Cyprus bailout.

Sentiment was also weighed by the Xinhua news agency saying on Saturday that Beijing and Shanghai will implement strict property cooling measures as part of a central government crackdown on the overheated property market.

Spot gold firmed 0.1 percent to $1,600 an ounce, partly supported by tension in the Korean peninsula.

"Normally a strong PMI from China would tend to draw investors towards stocks and not support gold prices, but this time we see a reverse. The North Korea tension is adding to the market uncertainty," said Brian Lan, managing director of GoldSilver Central Pte Ltd.