Jonathan Kicks Aondoakaa Out Of Justice Ministry, 4 Ministers May Go 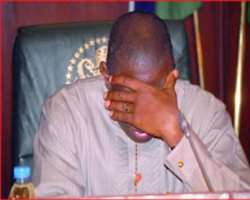 San Francisco Feb 10, (THEWILL) – The one time powerful and controversial Attorney General and Minister Of Justice, Mr. Michael Aondoakaa was on Wednesday removed from his pivotal position and moved to become the new Minister of Special Duties in a slight cabinet reshuffle by Acting President, Dr. Goodluck Jonathan.

Aondoakaa was among those Ministers who opposed a constitutional provision requiring the ailing president to transmit a letter to the National Assembly that would have allowed Goodluck Jonathan easily become acting president.

Sources familiar with deliberations at the Executive Council of the Federation Wednesday meeting, which lasted for six hours, said Aondoakaa tried to save his job before he was removed. The Benue indigene who was embroiled in a public row with information Minister Dora Akunyili was seriously reprimanded by his colleagues for his role over the refusal of Yar'Adua to transmit the necessary communication to the National Assembly.

A Presidency source told THEWILL that at least four cabinet Ministers may be removed soon in a major cabinet reshuffle as the acting president continues to pilot the affairs of Africa's most populous country.

Meanwhile, the anticipated debate on Professor Dora Akunyili's memo did not hold, a Presidency source said it was delisted from the agenda of the meeting because of the successful political solution by National Assembly.