WHY LEADERSHIP IS NOT OUR PROBLEM 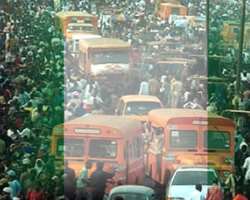 At every gathering of scholars, opinion leaders and other think-tank groups, leadership has often been identified as the bane of our nation. But my question is, Can any nation produce a leader that is not the reflection of the society he or she represents?

While Iam not saying there are no people whose thoughts, tastes and manners have been refined in our society, the attitudes of the majority is what Iam looking at!

When a child is born into any family, that child is a tabularasa! His or her mind is a clean slate; there is no innate idea in him. The baby will start learning from the family which is his or her first contact. The family is also the smallest unit of the society, while the society is the connectivity of people who share the same customs, beliefs, laws, organizations etc. But, in 10 years time, if you look at the child’s attitudes, and compare them to that of his or her elders, the difference will only be little. What has taken place is enculturation!

Nigeria is a country where people are quick to condemn any symptom of social malaise without really bothering to uproot the cause from our society. This was the scenario Jesus Christ condemned in Matthew 23:25-26 when He said: “Woe to you, scribes and Pharisees, hypocrites! For you cleanse the outside of the cup and dish, but inside they are full of extortion and self-indulgence. Blind Pharisee, first cleanse the inside of the cup and dish, that the outside of them may be clean also.” This expression is still very much present in our nation as stated inter abnitio. We demonize people without really examining our own conducts! We shout for justice when it only affects us, but we keep mute when it favours us! The tragedy of justice is when the greatest beneficiaries of justice become justice denials. Some of the fiercest critics of government are those who maltreat the few people working under them. Some are people who consciencelessly deal with their fellow human beings at the slightest provocation. They are are people who preach what they are not willing to concede.

In the same vein, I have observed some of those in government who preach democracy and rule of law! These are people who use the instrumentality of power to unduly influence things in their various communities; yet, they come out to condemn things when there are over powered by superior tactics and skills. Even among the middle class, they use police to intimidate and oppress the poor in some communities. Because of the high level of illiteracy and ignorance among our people, some privileged individuals in our various communities use police to arrest, detain, prosecute, convict and sentence their victims without any input from the judiciary. All these are done by the police alone! In some cases where the poor people are unjustly arrested at the instance of one privileged man or woman in the community, the arrested fellow will remain in police cell until payment is made for the person’s release. Most of the times, the police would say bail is free, but, if you happen to be their guest, you will know there is no free lunch in China!

Similarly, in some states where there are laws against devilish widowhood practices, some persons still manipulate our weak institutions to carry out their satanic wishes on some of these widows. The worst hit widows are those in the rural areas, where some title holders who benefits from the entrenched system and beliefs against widows are opinion leaders or stakeholders! Worst still, some of these Non Governmental Organizations (NGO’s) that defends women and widows rights are mostly found in the cities, yet the perpetrators of such atrocity against widows come out in the public to condemn personalities at the helm of affairs. Iam not saying they have no write to do so, but what am saying is that, we should practice what we preach.

Nonetheless, sociologists say, every societal change reflects the desire of few! Hence, conflict is a continuous affair. The only time there is peace is when the opposing forces are planning for renewed battle. Some of the vociferous criticisms are occasioned by personality clash. As it is often said, there is no permanent friend and there is no permanent enemy in politics, but, what is permanent is interest! The question now is, must we wait for conflicts of interest to ensue before we become ferocious critics of government? This question has a resemblance with what Stephen Sackur, the anchor of “BBC Hard Talk” programme asked President Yoweri Museveni of Uganda in 2012. He said, if Yoweri Museveni of 1986 should meet face to face with Yoweri Museveni of today, don’t you think he will use guns to chase Yoweri Museveni of today out of office? (Sic). But, in his answer, President Museveni deviated from what any critic of government who has been extended patronage would say. Instead of hiding under the cloak of an African adage that says, he who eat don’t talk, he said, if both of them should meet, they would not fight each other, they would be at peace with each other, because, Yoweri Museveni of today has gained more exposure, experience and knowledge. Probably, if Museveni of 1986 had known what Museveni of today had known, he may not have acted the way he did in 1986.

Finally, in 2008, when Lisa Miller and Richard Wolffe of Newsweek Magazine asked Barack Obama: “What do you think about the Kingdom of God? Is it attainable on Earth by humans”? Obama said: “Iam a big believer in not just words, but deeds and works. I don’t believe that the kingdom of God is achievable on Earth without God’s intervention, and without God’s returning through Jesus Christ, but I do believe in improvement”. Therefore, instead of casting aspersions on our leaders, we should always think and do good at all times! We can live in liberty under law if a mechanic in his workshop does not obtain money from his clients through con means. If a lecturer does not use his position to extort illegal money from his students and if a bureaucrat does not demand for a kick back before and after contract execution! The earlier we begin to respect our individual conscience in whatever we do, then we will begin to produce good leaders.