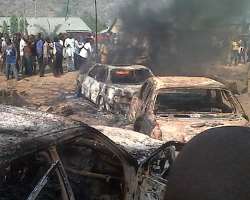 Mr. President, not again, as several citizens with many of them sleeping when they were reportedly killed during the dawn of the night, as in what occurred a few days ago in the Barkin Ladi area of Jos, Plateau State.

This is not the first time as the world has heard, dating back to 2010 about the deadly night and day terror and killings around Jos.

Mr. President, often one hears about the beautiful name of Joint Task Force (JTF), made up of police and the military that are reportedly patrolling some areas of Jos. But here is the problem. This is not real community patrolling as they are not deeply in the rural communities and the remote corners were the village inhabitants live and are killing each other.

Mr. President, don’t you expect that the combined force of police, soldiers and other law enforcement agents ought to be present in these villages at both day and night time, and at the right time?

Also, regardless of whether the violence is as a result of scrambling for land or cattle, village power, or fighting over ethnic or religious differences, or poverty; one thing is clear there is no full or active security force on the premise to help prevent both sides from engaging in the ongoing horrendous killing in the villages.

Why the leaders of the police and military will not make their men and women to be physically present in these known attack areas is beyond common sense understanding.

Unless something sensible is done we will again lose more lives in the coming months and years, and remain the laughing stock among democratic nations.

Real community policing means active partnership with the villagers, effectively watching over them, solving their social problems, enabling them with security and public safety tips, culturally responding to their concerns, and advocating for them.

Community policing means being around the potential victims at the right time, at the right place and having the right weapons and tools at the point where violence is about to occur or is occurring.

Community policing means being proactive to the people’s needs, and it is not in form of the reactive manner we always see, whereby our soldiers and police begin running into the area of fire and violence after it has long started or almost ended.

A line of community policing with a full implementation of a comprehensive policy is characterized by a long-term, proactive and focused approach. Giving what we already know about the nature of this violence, a non-stop-JTF presence and activities could bring reasonable control of the violence and meet the intervention needs of the people, as well as reach the targeted control over the troubled areas.

Community policing means not distancing JTF members from the people in need who could be able to provide valuable intelligence and the necessary information as long as there is some degree of trust and positive relationship between the people and the taskforce based community patrollers.

Community policing means going beyond just being illusive in terms of name but being active with full blown acts like foot-patrol, neighborhood presence, and helping to improve the quality of life of the people.

Mr. President, if the respective chiefs of our security agencies can only form a real and non-artificial rapport with each other, such relationship could extend to the rank and file, to the supervisors, and certainly to the communities in need.

Community policing work mostly work well in a non-rigid chain of command so as to enable free flow of information, and secure full interaction between all levels of players, in order to expand the spans of quick response.

Mr. President, the truth is that it is time for the Nigerian security forces, the Nigeria police especially to become more decentralized, to become more of an open system, so as to allow for swift and better deployment of officers in targeted communities. By doing this we will allow for quick as well as for effective response to the people.

In the absence of real community policing the quality of actions by the security agents will continue to be reactive in style and action, that means, they will continue to come into the areas of attack after most of villages have been raided, properties fully burnt down, and the killings have completed and the attackers have escaped.