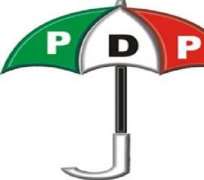 The party said the intelligence reports at its disposal has revealed that Princess Pat Ajudua, spouse of Fred Ajudua, Accord Party lawmaker and Minority Leader in the state House of Assembly planted a report in a national newspaper last week claiming that PDP, Action Congress and Accord Party in the state have endorsed her to represent Oshimili North LG for the second time come 2011 at the Delta State House of Assembly.

In an enlarged recent meeting of the party at Illah, leaders of the PDP in Oshimili North Local Government council spoke refuting her adoption and insisted that the publication was misleading and an insult to members of the party.

"There was no such meeting anywhere, no registered member of the party was there, PDP wants its member elected to DSHA and do not need to enter into accord with any party. Such arrangement is fraudulent most especially in the local government where the party chairman hails from. The woman they arranged to adopt is not a member of PDP, it was an emotional report," he stated.

According to him, only Governor Emmanuel Uduaghan has been adopted by the party in Delta North for 2011 election, maintaining that there must be free and fair election for all contestants.

On the possibility of Ajudua defecting to PDP, Okafor maintained that the party's constitution would take care of that when the time comes especially the two years clause issue for new members.

Investigation carried out by THEWILL in Oshimili North especially in Ibusa, country home of Nwaoboshi and Ajudua showed that there is strong resistance against the alleged adoption of Ajudua who is from the same ward with the PDP state chairman.