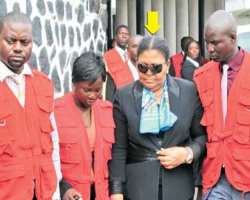 This was the high point of Wednesday's hearing in the on going trial of the former bank chief as Justice Dan Abutu, adjourned proceedings after defence counsel Professor Taiwo Osipitan, SAN opposed an attempt by the prosecution led by Mr. A.B Mahmud SAN, to have the accused person plead to the amended charge. Osopitan told the court that his client was still ill, and not in the right frame of mind to comprehend the fresh counts.

At this juncture, the trial Judge adjourned proceedings to February 22 to enable the accused person recover and take her plea. Earlier, the Judge struck out the two motions brought before him by both parties. He rejected the EFCC motion for stay of execution of the order granting the accused leave to travel out of the country for medical treatment, on the ground that the relief is contained in the record of appeal filed at the Appeal Court. The Judge also dismissed the motion by the defendants asking for stay of proceedings on the ground that the State Security Service was not party to the criminal charge against the accused person.

Osopitan had argued that the SSS had no power to hold on to Mrs. Ibru's passport; an action, which he claimed, prevented her from traveling out for treatment as ordered by the court. He prayed the court to order the SSS to deposit Ibru's passport with the registrar of the court so that she could have access to it whenever she needed it. He further sought the permission of the court to join SSS in the matter.

But the SSS counsel, Mrs. Bosede Komolafe said that her agency was not a party in the matter and that it was not true that the CBN Governor, Lamido Sanusi ordered SSS to seize Ibru's passport. She explained that under the National Security Act, the agency has the power to do so. Mrs. Ibru was among 15 former bank chiefs arraigned late last year by the EFCC for granting over N747billion non-performing loans. She was slammed with a 25-count charge.