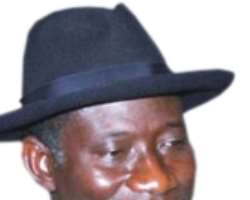 Ascribed "the tribute that vice pays to virtue," hypocrisy, now greases the wheels of Nigeria`s polity.Picture this,for weeks the National Assembly justified the prolonged absence of President Yar`adua. David Mark and Dimeji Bankole were alleged to have received

$12,000,000.00 and $6,000,000.00 respectively for the continued support of his absence. But when the heat was turned on them by colleagues who threatened them with impeachment, they hurriedly abandoned ship. Consequently, the Nigerian Senate today passed a motion asking the Vice President, Dr. Goodluck Jonathan to act as President And Commander-In-Chief of the Armed forces pending the return of President Umaru Musa Yar'Adua.

Huhuonline.com understands that the motion which was moved by Senator Teslim Folarin, from Oyo Central, received overwhelming support by the majority of Senate members, puts further pressure on President Umaru Yar'Adua to formally transfer powers but there is no provision for such a move by the upper house of parliament under the terms of the constitution.

In arriving at this position, the Senate said the President has fulfilled the provisions of section 145 of the 1999 constitution through his BBC telephone interview of January the twelfth. He said "the President through his call to the BBC Hausa service had informed us of his medical vacation and is therefore incapable of running the affairs of the Nation in his absence" The Vice President ... shall henceforth discharge the functions of the office of the President, Commander In Chief of the Armed Forces of the Federation, As Acting President," the motion said.

Moreover, the Senate also passed a motion, putting a clause in their initial resolution that the Vice President shall seize to discharge the functions of the President when the president transmit a letter to the national assembly that he has returned from medical vacation. Senate President, Senator David Mark while addressing the House stressed the need for the motion to be implemented based on the situation surrounding the President's absence. He said the decision had to be taken because a lot of concerned Nigerians have given them reason to resolve the constitutional crisis the country is going through at the moment. David Mark also seized the opportunity to thank the Governors Forum for backing the Senate, the Elders Council, Former President Yakubu Gowon, The Save Nigeria Group Lead by Professor Wole Soyinka and other concerned citizens who lent their voices in the cry for the resolution of the power vacuum in the Nation. He also said that henceforth, the National Assembly will receive correspondences and communication from Vice President Goodluck Jonathan as the Acting President.

In a similar vein the lower legislative house, House of Representatives has also passed a motion asking the Vice-President, Dr Goodluck Jonathan to assume the duties of the President and Commander-in-Chief of the armed forces. Earlier the House held a closed session to debate the 2010 budget, paving the way for the spending plans to be signed into law. Once the House Of Representatives approves the 4.08 trillion Naira budget, the senate must do the same and any differences must be harmonized before the spending plans can be signed into law. President Yar'Adua sent the budget proposal to the National Assembly In November but has since been absent for more than two months, receiving treatment for a heart condition in a Saudi hospital.