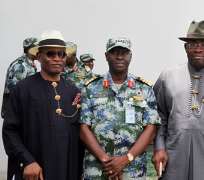 SAN FRANCISCO, March 27, (THEWILL) –The Chief of Naval Staff, Vice Admiral Dele Ezeoba, has expressed worry over the increasing rate of oil theft in Bayelsa State, describing the state as the corridor of illegal oil bunkering in the Niger Delta.

Lamenting the situation in the state, Ezeoba, who spoke at Oghara on Tuesday during the facility tour of naval formations in Delta State, disclosed that the Navy was dealing with the problem.

He however warned that the Navy High Command would not tolerate any complicity on the part of naval ratings and officers in the crime.

The naval chief therefore charged the naval ratings and officers to change their attitude in the fight against illegal oil bunkering or risk sanction.

Speaking on the development, Ezeoba warned his men and officers to have a change of attitude in their operations to enable him actualise his new plan of addressing the menace confronting the nation's waterways.

Ezeoba who also toured naval formations and facilities in Warri, Oghara and Sapele in Delta State, while addressing officers and ranting at the Naval Engineering College in Sapele, said that the bulk of the bunkering and security problems the Navy was saddled with presently were from the Bayelsa State.

“Bayesla State is the ‘corridor’ where the Navy has enormity of problems particularly illegal oil bunkering," Ezeoba, who noted that his visit was to assess the situation and see how the problems could be resolved, said.

"We have defined our operational guidelines and established parameters that will help us address the issue head on. We have built platforms, enhanced training objectives that will help and we have also understood the need for a change of attitude by officers and men so that we can stop complicities that we have found out to be part of the problem.

"That is why I’m on this roadmap so that we can appeal to their conscience; give them positive guidance as to doing what is right so that collectively we can solve this problem.

“I can assure you we are working on it and the result will begin to manifest as soon as possible. It requires a collective action that encompasses surveillance, response and enforcement and we are doing all that is humanly possible with the tacit support of the minister of defence, the guidance of the chief of defence staff, that army and the air force."

Ezeoba also urged the media to report accurately so that the nation is not over heated with wrong impressions when there is no need to do so.

In a related development, the Naval Chief had earlier expressed delight over the state-of-the art facilities at the Naval Logistic Headquarters located at Oghara, Ethiope West Local Government Area of Delta State .

Speaking during the facility tour of the command on the backdrop of recent report on the Nigerian Police College, Ikeja, Lagos State which exposed the rot and deplorable state of the nation's number one police college, Ezeoba said "this is how a logistic centre should look like."

While being conducted round the facility by the Flag Officer Commanding, (FOC), Navy Logistic Command, Rear Admiral Abdul Shettima, the Chief of Naval Staff said President Goodluck Jonathan was determined to turn around the nation's security apparatus.

Ezeoba, who expressed his joy over the state of facilities at the Command however commended the personnel of the command for their uprightness and commitment to protect the nation's territorial waters.

He said the Nigerian Navy would fare better in the years ahead.

SInce the commissioning of the edifice in 2010, more structures have sprung up .

Among them is the Naval Primary School multipurpose hall within the complex, senior and junior officers mess, naval computer laboratory as well as officers quarters which were also inaugurated by Ezeoba.

The facility was built by embattled former governor of Delta State, Chief James Ibori and completed by incumbent governor, Dr Emmanuel Uduaghan, who brought President Jonathan to inaugurate the project in 2010.