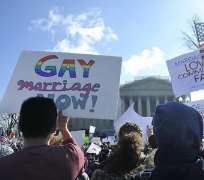 The Supreme Court of the United States of America is poised to rule on the legality of same sex marriages today, the 26th of March 2013. President Barrak Obama has openly endorsed such marriages just as has the much loved former American Secretary of State Hilary Clinton. According to a CNN poll no less than 58 per cent of the American people support same sex marriages as well.

It is clear that the world is changing and that America, under Obama, has redefined her moral and religious values dramatically. I saw this coming and that is precisely why I have never been a great fan of Barrak Obama and that, much to the chagrin of my fellow Africans and men and women of colour from all over the world, I openly opposed his re-election last year and wrote a highly celebrated essay titled ''Can Barrak Obama Be Trusted'' which created quite a stir and which was published in the newspapers of no less than 6 countries in the world. The truth is that Obama'a latest endorsement of and his stand on same sex marriage utterly appauls me.

What is the world coming to? How come we suddenly find it so easy to turn our backs on the word of God which specifically defines marriage as a holy union between a man and a woman which was designed primarily for the purpose of procreation? Not only does Obama and 58 per cent of the American people believe in same sex marriage but they also believe in same sex couples adopting and raising children. Is this not a tragedy of monuemental proprtions? Has America turned it's back on the Living God. There is not one of the three great monotheic faiths on our planet, whether it be christianity, islam or judaism, that supports same sex marriage. As a matter of fact they all specifically forbid it and describe it as an abomination.

I have nothing against gays and I believe that a person's sexual preferences or sexuality are entirely their own business. I also accept the fact that gays should not be in any way discriminated against or subjected to hate speech. Your sexuality is a matter of choice and no-one has the right to deny you the right to make that choice. This much I conceede and accept. However I draw the line when it comes to the issue of redefining the traditional definition of marriage and allowing gay couples to enter such a union. This is because the institution and it's definition was established by Almighty God Himself and it is not for man to alter or amend it. Attempting to do so is tantamount to man trying to play God. It is not right, it is morally indefensible and it is a violent and unprecedented attack on the institution of marriage and our traditional family values.

Yet America is not alone in it's madness. Europe has gone crazy too. In France, the U.K, Holland, Sweden, Denmark, Germany and various other European countries legislation to pave the way for same sex marriage has already been introduced and in some of those countries it is already lawful. The same thing is happening in Argentina, where gays are now allowed to marry, and I gather that Brazil is treading the same path. What is the world coming to? Will we ever see gay marriages in Africa and in Nigeria? I have little doubt that South Africa, the traditional bastion of liberalism in Africa, will be the first to permit it if they havn't done so already. Should we allow Nigeria to climb this slippery slope as well? I sincerely hope not. Meanwhile let us wait to see whether the American Supreme Court will do the right thing and shoot this abominable and morally repugnant concept down or whether they will affirm it. For the sake of God and humanity I sincerely hope that they choose the latter course.

I pray that I have not hurt anyone's feelings by expressing these views on same sex marriage because the last thing that I would want is for anyone to describe me as a raging and ranting homophobe. I am far from that. As a matter of fact I think that it is a mark of a truly civilised society when people can tolerate and treat with love those that are ''different'' from them whether it be as a consequence of their faith, culture, colour or sexuality. The call for the enforcement of the rights of ethnic or sexual minorities, including the rights of homosexuals and lesbians, is an ethos and philosophy that I wholly subscribe to.

In any plural, multi-religious and multi-cultural society it is incumbent upon us all to be as tolerant and accomodating as posssible about the peculiarities and preferences of one another. I am proud to say that some of my closest friends are gay and as a matter of fact many of the young men that I went to British public school with many years ago openly experimented with gay sex and gay love only for most to later discover that it wasn't for them. I see or feel no shame in that because for many it was simply a beautiful journey of self-discovery and love. As far as I am concerned it is each to his own but that should not stretch into marriage or the right of same sex couples to adopt and raise children.

Our country Nigeria, as in most of Africa, is a land that is plagued with ignorance and intolerance when it comes to the issue of sexuality and gays. We are wholly intorent and we are totally insensitive when it comes to the feelings of those in our community that are gay. Gay-hunting, gay-bashing, gay beating, gay-hating and even gay-killing is a favourite past time of ours and as far as I am concerened this is totally unacceptable. For example how can we have laws that send a man or woman to jail or to his or her death simply because he or she has different sexual preferences to the rest of us? As long as the two parties that are involved are consenting adults what they do in the privacy of their homes or hotel rooms is surely no-one else's business. We cannot regulate people's sexual habits or preferences but at the same time we have a duty to protect the institution of marriage as it is described and defined in the Holy Bible, the Holy Koran and the Torah.

My position is therefore clear and it is as follows. I say ''yes'' to a tolerant and open society that allows individuals to be gay, to explore their sexuality and to indulge in their sexual preferences without any sanction or persecution. At the same time I say ''no'' to same sex marriages which I believe are a step too far and a direct attack on the family and God's purpose for a holy union that is designed and meant to lead to the procreation of children. The line is thin but the difference is clear. May God continue to guide us all in these matters.