UNEMPLOYMENT HARAM AND THE CRICKET 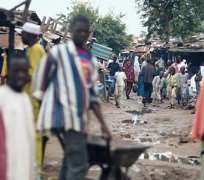 There is no disappearing trick better than the availability of a dense forest to disappear into; there is no sacrifice more efficacious than having many people on one's side; there is no “The gods have elevated me” that is higher than the back of a horse.

During the week"...Former President Olusegun Obasanjo called on the Federal Government to develop the agricultural sector of the Nigerian economy in order to create job opportunities for the youth.

Delivering a lecture entitled 'Managing agriculture as a business to unlock Nigeria's agricultural potential' at the Agricultural and Rural Management Training Institute (ARMTI), Ilorin Mr. Obasanjo said going by the number of graduates produced in Nigeria annually, the government must develop new ways of job creation..."

He summed it up saying "Nigeria was sitting on keg of gun powder". The fact is that whether we like it or not even the devil tells irrefutable truth, the motive is the only thing that can be questioned.

There is a growing 'unemployment haram', it is not just about unlocking the agricultural sector, it is about virtually all socio-economic and ethno-political sphere of the nation in terms of youthful productivity.

I hardly take to heart when past leaders talk about matters they had opportunities to have addressed yet failed to solve. The tip of the iceberg however is that if we look at this, we know it is worse......the National Population Commission (NPC) has said the country’s population has risen from the 140,431,790, to 167,912,561 as at October 2011.This represents an annual population growth rate of 5.6 million people.

The Ministry of Youth Development, added that there are 68 million unemployed youths in Nigeria, that's like some 43% youth population.

And with approximately 300,000 graduates enrolled in the NYSC scheme, excluding the number of graduates that do not make it for various reasons, the real haram is simply building up.

Today we are engrossed in the amnesty for Boko Haram, when the truth remains that a larger Haram is staring at us in the face, and I honestly hope we will be able to provide amnesty.

I need not remind us of the rise in the rate of criminality, vices and bestial acts. However the worrying part is, that 7 out of 10 apprehended criminals 'have seemingly' legitimate reasons for their crimes of theft, robbery and kidnap and are graduates of one form or the other.

Our system is not working from South-North, Onitsha-Kano, Kaduna-Abeokuta, it is full of fallacy, and new universities are not in any way the solution, as the established ones keep dropping in standard.

Questions have been asked regarding the curriculum of our schools in relation to job preparedness and entrepreneurial skills teaching. While most schools are now teaching courses in peace studies, conflict negotiation and terrorism, very few are preparing employable products.

After an average of six years for a four year programme of study, a young grad can barely do a resume/curriculum vitae, he simply copies a template. If given a take-off grant she barely knows what to do beyond a Blackberry Smartphone and Brazilian hair.

Permit me to ask, where do you live, have you noticed the flock of young people around--they are defined by the phrase "I am waiting for admission, I am waiting for NYSC, I am hoping I get the job". They are increasing, from ages 18-35; some still with their parents, no hope, no hopeless, best describes the situation, idle hands waiting the devil’s instruction, with the proliferation of Small Arms; there is a willing population growing and the repercussions are better imagined.

The growing haram of unemployment is not just about the government providing jobs, not at all, it is about an enabling environment that facilitates private enterprise that encourages entrepreneurial spirit without a monopoly.

We have a population that can be our blessing or ultimately our undoing. The government through its spokes-people should stop all the lies and know that there is no disappearing trick better than the availability of a dense forest to disappear into; projections to create 4 million jobs in two years, and significantly grow the economy according to Olusegu Aganga is a fat lie.

Let me end with this insightful story, a man and his friend was in a city, walking through the street. It was during the noon lunch hour and the streets were filled with people. Cars were blowing their horns, taxis were squealing around corners, sirens were wailing, and the sounds of the city were almost deafening. Suddenly, the man said to his friend, "I hear a cricket."

His friend said, "What? You must be crazy. You couldn't possibly hear a cricket in all of this noise!" "No, I'm sure of it," the man said, "I heard a cricket."

"That's crazy," said the friend.
The man listened carefully for a moment, and then walked across the street to a big cement planter where some shrubs were growing. He looked into the bushes, beneath the branches, and sure enough, he located a small cricket. His friend was utterly amazed. "That's incredible," said his friend. "You must have super-human ears!"

"No," said the man. "My ears are no different from yours. It all depends on what you're listening for."

"But that can't be!" said the friend. "I could never hear a cricket in this noise."

"Yes, it's true," came the reply. "It depends on what is really important to you. Here, let me show you."

He reached into his pocket, pulled out a few coins, and discreetly dropped them on the sidewalk. And then, with the noise of the crowded street still blaring in their ears, they noticed every head within twenty meters turn and look to see if the money that tinkled on the pavement was theirs.

"See what I mean?" asked the man.
"It all depends on what's important to you."
As a people for now we are a nation, till otherwise, let us focus our attention and minds on the more important aspects of life, it is not about the likes of ‘liebaran’ Maku, who heard that a total of 195,534 jobs were generated in 2012 by the Federal Government of Nigeria via several contracts awarded by the Federal Executive Council (FEC) or Northern thieving governors, Southern mugu parks, and a vast number of dishonoured legislators that only hear their greed.

Sometimes we hear but do not listen; the haram is closing in on us, the axiom I started with simply implies that practical and realistic moves are more reliable than mysterious expectations. We still can, if we want to, but only time will tell.