Analysis: 'Rock Star' Campaign May Not Be Enough For Venezuela's Capriles 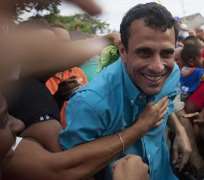 Emerging from his bus, Venezuela's opposition presidential candidate Henrique Capriles is engulfed by frenzied female supporters who push past bodyguards to hug, kiss and photograph their idol.

Most are young and have been waiting for hours under the sun to see him. Laughing and punching his fist in the air as he wades through his fans, Capriles emerges on stage moments later to roars from the crowd and screams of "Marry me, skinny!"

"He's more than a politician, he's a rock star!" said 19-year-old law student Eugenia Diaz, waving a heart-shaped banner that read "I love you, Henrique!" at a rally on a basketball court in Maturin in Venezuela's sweltering eastern plains.

As in the 2012 presidential election, which Capriles lost to the late socialist president Hugo Chavez, the youthful and energetic opposition leader is once again creating a buzz as he criss-crosses the South American nation ahead of the April 14 vote.

Yet despite the euphoria around him, the 40-year-old state governor again looks like a long shot, this time struggling to catch up with acting President Nicolas Maduro, who sells himself as Chavez's political heir.

Chavez named Maduro as his preferred successor before dying of cancer on March 5. Playing heavily on that, Maduro has a formidable lead over Capriles with three recent polls showing him ahead by between 14 and 21 percentage points.

Neither Capriles, nor the scores of strategists and advisers around him from the 30 or so political movements in the opposition Democratic Unity coalition, underestimate their task.

"There is a possibility of winning - though I have everything against me," Capriles told Reuters, pumped up but also realistic after a convoy parade in southern Bolivar state where over-eager supporters even pulled open his shirt.

FIGHTING 'NICOLAS'
Maduro has not only Chavez's powerful personal endorsement - in an emotional last public speech before his death - but also the power and cash of the state behind his campaign.

That allows him to appear at will to the entire nation across all broadcast media in so-called "cadena" or "chain" shows that foes see as a blatant abuse of power.

As well as benefiting from the emotion over Chavez's death, Maduro is basking in the goodwill generated among the poor by the multiple social welfare "missions" that were such an important part of his former boss's 14-year rule.

Foes say he also has behind-the-scenes support from communist-led Cuba, where Chavez was treated before his death and which receives more than 100,000 barrels per day of oil from Venezuela.

"We're fighting against a president-candidate, all the oil dollars, the public institutions, the Cuban government and of course the myth they want to create around Chavez," complained Capriles' campaign director, Carlos Ocariz.

Though the time frame is shorter, Capriles is using the same strategy as in 2012: a punishing schedule of visits across two states per day, mixing rallies with media interviews and meetings with local politicians and residents.

His political and rhetorical thrust is different though.

At every turn, Capriles baits Maduro, 50, referring to him only as "Nicolas" and seeking to depict him as an incompetent puppet of Cuba's communist government trying to imitate Chavez.

One of his taunts - "Nicolas, don't get dressed up, you're not going anywhere!" - is a popular chant at opposition rallies.

Maduro, who calls himself an "apostle" of Chavez and names his mentor at every turn during his own events, has tried to turn the scorn back on Capriles.

"For every 10 words, he names me nine times. He's obsessed," Maduro told a crowd in western Zulia state. He joked that his rival wakes up thinking about him and urged supporters to learn a new song called the "Nicolas dance" that lampoons Capriles.

HOW TO "BEAT A GHOST"?
Beyond the rhetoric, Capriles is trying to present a radically different vision of government to the Chavez-style socialism that Maduro vows to continue.

He wants to stop preferential alliances with Venezuela's most controversial foreign friends of the Chavez era - Iran, Belarus, Syria and Cuba for example - in favor of improving ties with Latin American neighbors and "democratic" nations.

In Maturin, Capriles was preceded on stage by various local residents who presented complaints that ranged from lack of toilet paper in the shops to unfair distribution of oil revenue.

As well as attacking Maduro, that is the opposition's second main campaign offensive: presenting themselves as the only force with the will to tackle Venezuelans' myriad daily problems.

"What's the point of having the biggest oil reserves in the world if people still live in homes with mud floors," Capriles told locals in Maturin, where many work in the oil industry.

Turnout may be a crucial factor on April 14.
Opposition supporters are still recovering from the double disappointment of losing to Chavez last year, and then taking a thrashing in regional elections in December where the ruling party won all but three of the country's 23 states.

So Capriles' first challenge will be to get out the 6.6 million people who voted for him in the October election - a 44 percent share of the total.

Although Chavez won comfortably, it was the best showing by an opposition candidate in four presidential elections against Chavez. Voter participation hit 80 percent, a record for Venezuela.

The opposition will hope government supporters, though generally expected to follow the late Chavez's instructions to vote for Maduro, might do so with less enthusiasm and in fewer numbers than last year.

"You don't have to be very clever to see that Maduro is the favorite," said local pollster Luis Vicente de Leon. "Capriles' big challenge is to overcome apathy and the feeling (within the opposition) that nothing can change the result."

Wherever Capriles goes, it is impossible to avoid the influence of Chavez, whose image and name appear to have become even more ubiquitous in death.

In Maturin, a stencil of his signature could be seen on the side of the stage where the opposition leader spoke. On a wall nearby, a slogan read: "Chavez lives! The revolution continues!" in fresh paint.

"This is a tough and surreal election," mused one Capriles aide. "How do you beat a ghost?"