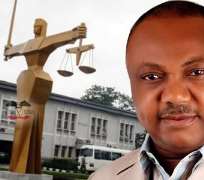 SAN FRANCISCO, March 25, (THEWILL) – The Democratic Peoples Party (DPP) candidate in the April 2011 governorship election in Delta State, Chief Great Ogboru, is to know his fate on June 21 as the Supreme Court decides whether or not to set aside its earlier judgment affirming the election of Dr. Emmanuel Uduaghan as winner of the election.

Presiding judge, Justice Tanko Muhammed, after all the lawyers had addressed the court, on Monday, fixed ruling on the case for June 21.

Ogboru is seeking to set aside the court's judgment which affirmed Uduaghan as the winner of the Delta State governorship election held in April 2011.

Ogboru's lawyer, Dr. Dickson Osuala, had argued that the Supreme Court should not have struck out his client's appeal, having found that the judgment of the court of appeal was a nullity.

He asked the court to set aside its decision delivered in March 2012, saying "it amounted to putting something on nothing."

He said that having declared that the lower court judgment was a nullity, the proper order to make was to hear Ogboru's appeal or remit the case back to the lower court for fresh hearing.

However, the court drew Osuala's attention to the fact that Ogboru's initial counsel, Mr. Sebastine Hon, SAN, had earlier filed and withdrawn a similar application and that the new application would amount to an abuse of the process of the court.

Osuala, however, told the court that Hon withdrew the application without the authority of his client and under suspicious circumstance.

The presiding justice, Justice Tanko, nonetheless warned Osuala not to cast aspersions on Hon and that, as a lawyer, he had the right to do his client's case as he deemed fit.

In his response, Chief Wole Olanipekun SAN who appeared with Chief Alex Izinyon ,SAN, for Uduaghan, insisted that Ogboru was bound by Hon's withdrawal of his application.

He cited cases to show that a lawyer had the authority to conduct his client's case and that since Hon was briefed by Ogboru to represent him, Ogboru could not be heard to say that his application was withdrawn without authority.

"A lawyer is not a steward or servant of his client. He does not need the authority of his client to make concession or compromise," Olanipekun said.

He urged the court to hold that Hon acted with authority when he withdrew the application.

Olanipekun asked the court to dismiss the application because there must be an end to litigation.

Counsel for the Peoples Democratic Party (PDP) and the Independent National Electoral Commission (INEC), Mrs. J.O Adesina, SAN, and Onyechi Ikpeazu, SAN, respectfully agreed with Olanipekun and called on the court to dismiss the case and award cost against Ogboru.

Adesina said in so far Hon had the authority to represent Ogboru, whatever decision he took is binding on the appellant.

Adopting the same stance, Ikpeazu said that the applicant proceeded as if there was no proceeding on October 15, 2012, the day that Hon withdrew the application to set aside the judgment, he ought to have first set aside that which had transpired.

"Without doing that, the concession made by Hon and the order made by my Lords following that withdrawal remained binding on the applicant," he said.

Replying on point of law, Osuala said it was not in the law that he must first set aside the earlier order striking out the suit.

He argued that since the earlier application was struck out, his client had the right to come back to court.

He also informed the court that Ogboru had written to the office of the Chief Justice of Nigeria to protest the withdrawal of the application by Hon.