Blackface Is Angry With 2face For Not Inviting Him To Dubai 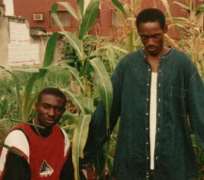 Blackface, one of the famous but defunct group, Plantatun Boiz, is not happy at the moment with Tuface, a former buddie and pal, for not sending him invitation to Dubai for the superlative wedding.

Blackface expressed his grievance recently on a social media; Twitter, when a fan asked him why he was not at the event. And his response was like “I no dey go where I no dey invited!”

From the look of things, it's so obvious that the guy is not happy for being segregated to witness the wedding despite the fact that the song that actually made Tuface, The African Queen, was composed by him. This is really not good enough!

Back in the day, 2Face was one part of three-member boy band 'Plantashun Boiz'. After releasing classics like “Knock me Off” and “You and I“, the group split amidst controversial circumstances in 2004. It seemed all members buried the hatchet however as the group re-united to release one final album 'Plan B' three years after the split.