Maduekwe, Babalola Locked Out Of Meeting With VP 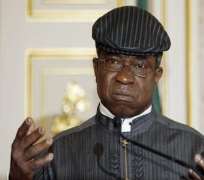 San Francisco Feb 08, (THEWILL) – The Vice President's zero tolerance for lateness and indiscipline continued on Monday when Foreign Affairs Minister, Ojo Maduekwe and Power Minister, Lanre babalola were both locked out of a meeting with the Vice President and some potential foreign investors.

The Ministers arrived a couple of minutes late for a meeting which was holding at the Vice President Jonathan's conference room.

Protocol permits that once the President or Vice President enters a function, all doors are shut.

Both men said they were notified of the meeting a few minutes earlier.