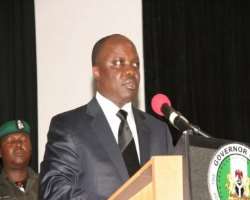 Asaba Feb 08, (THEWILL) - Barely 14 months to the 2011 general elections, politics in Delta state has shifted to a higher gear following the series of endorsements secured by the incumbent governor, Dr. Emmanuel Uduaghan.

The usually peaceful people of the Isoko ethnic group, are reportedly divided over the governor's purported endorsement for a second tenure by some elders of the PDP from the area.

The endorsement has pitched Isoko indigenes occupying positions in the state government against those outside the establishment. Comrade Ovuozorie Macaulay, the Commissioner for Power and Energy had in his bid to actualize his senatorial ambition sponsored a meeting of the Isoko PDP elders held at Eboh Hotels, Oleh, Isoko South council area where the governor was endorsed for a second term. According to the elders at the meeting, any Isoko son or daughter wishing to contest the governorship election will be doing so at his or her own risk.

A source that witnessed the meeting said “The likes of Otowa who caused crisis at Emede and sent the monarch and others on exile and Otolo did not speak the minds of the Isoko nation. Infact they are jobbers and cannot decide for the entire Isoko nation on who to contest for any position in the state”, the source said.

It was authoritatively gathered that the endorsement of the governor is linked to the alleged governorship ambition of Rear Admiral John Kpokpogri (Rtd) who is of Isoko ethnicity.

Comrade Ovuozorie Macaulay; Commissioner for Special Duties, Hon. Ross Uredi; and Secretary PDP, Chief Solomon Ogba, had traveled all the way to Lagos where the retired naval officer is resident to persuade him against contesting the 2011 election. Their mission was however unsuccessful as Kpokpogiri insisted on contesting the poll.

Though John Kpokpogri is yet to declare his governorship ambition, it was reliably learnt that the incumbent governor, Emmanuel Uduaghan is not taking any chances.

THEWILL investigations have however revealed that Kpokpogiri enjoys a large number of followership mostly amongst the Isokos and Ijaws in the state.

Text messages sent to Hon. Uredi and Chief Ogba for comments were ignored but in a telephone chat Comrade Macaulay neither denied nor agreed that their mission to Lagos was to persuade the former Rear Admiral instead, he insisted on a face-to-face meeting with the reporter.

Meanwhile, in a press release by the Isoko United Forum (IUF) which was signed by Mr. Otuada Believe, the group said that the true elders and leaders of Isoko which include Chief James Ekpre Otobo, Chief Senator Francis Okpozo, Chief Paul Eriri, Chief.O. G. Oneneme, Chief Ovie Itoje, Chief Benjamin Ovririe and others have not endorsed the Uduaghan for a second term in office.

The group stressed that the purported endorsement of the governor was done for the selfish interest of some people, considering that the current administration has done much for the Isoko people.

The statement said, “In Isoko, there is no water, no light and even the man who led the team that purportedly endorsed Uduaghan for a second term, has no road to his village (Igbide).”

Also reacting to the development, the state Chairman of Congress for Democratic Change (CDC) and Chairman, Coalition of all Registered Political Parties in the state, Hon. Moses Abeh has described political endorsements in the state as undemocratic.