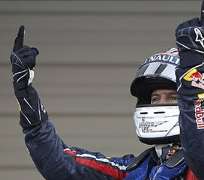 The world champion was nearly a second quicker than Felipe Massa, who edged out team-mate Fernando Alonso with the last lap of the session.

Lotus's Kimi Raikkonen was seventh ahead of McLaren's Jenson Button.

Raikkonen was later given a three-place grid penalty for impeding Rosberg and dropped down to 10th place, behind Button, Force India's Adrian Sutil and McLaren's Sergio Perez.

Vettel and the two Ferrari drivers were the three final cars to cross the line in a session that started in the rain and dried throughout, but always stayed too wet for 'slick' dry-weather tyres.

Alonso was first to cross the line, displacing Hamilton as the fastest man, before Vettel beat him by just over a second, and then Massa split them with the final lap.

Vettel and Massa came in for a fresh set of intermediates prior to their final runs, but Alonso elected to stay out.

The Brazilian out-qualified Alonso for the fourth successive race - this time by the margin of 0.14secs.

"We thought it was best come in for new tyres and we confirmed that pretty soon," said Vettel. "I was surprised by the gap in the end."

Massa said: "I don't know if we were able to be second and third in the dry - there were other quick cars like Webber and Kimi.

"It was a good qualifying for us. We took the right decision to stop to change tyres and managed to put a good lap together."

Team-mate Alonso added: "It is a long time since being in the top three, since Hockenheim [in July last year] so it is nice to be back here.

"Starting third gives you the realistic opportunity of a podium and it gives you also the possibility of winning the race. It is a good position to start [from] and we are very happy."

Hamilton lost out by not stopping to fit a fresh set of 'intermediate' tyres.

He said: "Our strategy was to stay out; we thought it would dry up a bit more, but it didn't. But there's lots of positives to take out so I am excited about the race."

The rain hit halfway through the second part of qualifying and Force India's Paul di Resta was one of those to lose out as a result.

The Scot was called in by his team to change tyres and to do so he had to abort a faster lap and by the time he was out on the track again it was raining.

Lotus blamed the failure of their weather radar for Grosjean missing out on the top 10 shoot-out.

Williams continued to struggle, just as they had at the first race of the season in Australia a week ago, with Pastor Maldonado 16th and team-mate Valtteri Bottas 18th after failing to progress beyond the first knock-out session, which was held in the dry.