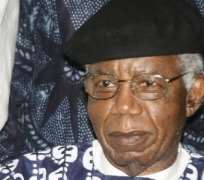 The death last night of Professor Chinua Achebe meant the dimming of one of the world’s brightest literary stars. Yet Mr. Achebe, whose works included the inimitable Things Fall Apart and four other highly celebrated novels as well as four collections of essays, a short story collection, several children’s books and last year’s widely debated memoir, There Was a Country: A Personal History of Biafra, was in person one of the most approachable men I ever met. His personal modesty sometimes masked the fact he was a writer of such staggering talent, ambitious range, and intellectual power. His surpassing gifts as a writer as well as his admirable personal attributes will combine to make him – one can confidently predict – an imperishable presence in global letters and life.

I had the rare honor and luck of being close to the revered Achebe for some thirty years. In that time, he was an inspiration, model, beacon of moral clarity and intellectual integrity as well as my teacher in the best, broadest sense of that word.

I first met Achebe when I was a young journalist at the now defunct African Concord magazine. My first major assignment was to interview him at his office then at the Institute of African Studies at the University of Nigeria, Nsukka. The encounter taught me something about the man’s genial and generous nature—and the depth of his humanity. I will get to that first encounter later, but must recall a more recent memory.

Five years ago, I drove from my home in central Connecticut to the quiescent country precincts of Annandale-on-Hudson to visit Chinua Achebe, who then held a prestigious endowed professorial chair at Bard College and whose novel Things Fall Apart was enjoying a cheery 50th anniversary. â€¨

Achebe's self-effacing, soft-spoken personality was always in ironic contrast with the exuberant celebration that erupted around his first – and most widely read and translated – novel. I was in his home to coax him to look back on 50 years of his book's extraordinary journey. Achebe disclosed that I was one of perhaps more than a hundred interviewers he'd hosted that year. Even so, I dared convince myself that there was something special about my interview with him.

I had interviewed Achebe several times in the past – first in 1983, when I was a rookie correspondent for the now defunct African Concord, the last time in 1987, shortly after the publication of his latest novel, Anthills of the Savannah. That first interview set a mood for my relationship with the author. Quite simply, he saved my career. â€¨

I met Achebe by sheer serendipity. It was 1983 and I had just graduated from college. Visiting Ogidi, his hometown, to see my girlfriend at the time, I raved and raved about Achebe and Things Fall Apart. The young woman listened for a while, a bemused smile creasing her cheeks. Then she said: "Achebe is my uncle. His house is a short walk away. And he happens to be home this weekend. Do you want to visit him?" â€¨Did I ever! â€¨â€¨

The Achebe I met in his country home personified grace. I still remember that he served us biscuits and chilled Coca Cola. He regarded me with penetrating eyes as I gushed about his novels, his short stories, his essays, even reciting favorite lines I had memorized from years of devoted reading. I told him I had just got a job with the Concord and would be honored to interview him. He gave me his telephone number at Nsukka, the university town where he lived and ran the Institute of African Studies. â€¨A week later I flew to Lagos, reported for work, and told the weekly magazine's editor that I had Achebe's telephone number – and a standing commitment that he would give me an interview. Elated, the editor dispatched me on the assignment. It was my first real task as a correspondent. â€¨â€¨

Achebe and I retreated to his book-lined office at the institute. The air in the office seemed flavored with the scent of books stretching and heaving. Five minutes into the interview I paused and rewound the tape. The recording sounded fine and our interview continued for another two hours. Afterwards Achebe told me it was one of the most exhaustive interviews he'd ever done. I took leave of him and, heady with excitement, took a cab to the local bus stop where I paid the fare for a bus headed for Enugu – the state capital where I had booked a hotel.

That evening several of my friends gathered in my hotel room. They asked questions about Achebe, and then said they wanted to hear his voice. Happy to oblige them, I fetched the tape recorder and pressed its play button. We waited – not a word! I put in two other tapes, the same futile result. How was I going to explain this mishap to my editor who had scheduled the interview as a forthcoming cover? â€¨

I phoned Achebe’s home in panic. In a desperate tone I begged that he let me return the next day for a short retake. "Thirty minutes – even twenty – would do," I pleaded. I half-expected him to scold me for lack of professional fastidiousness and hang up, leaving me to stew in my distress. Instead he calmly explained that he had commitments for the next day. If I could return the day after, he'd be delighted to grant me another interview. And he gave me permission to make the next session as elaborate as the first.

Two days later we were back in his office for my second chance. This time I paused every few minutes to check on the equipment. I stretched the interview to an hour-and-a-half before guilt – mixed with gratitude – compelled me to stop. It was not as exhaustive as the first outing, nor did it have the spontaneity of our first interview, but it gave me – and the readers of the magazine – a prized harvest. My friends got a chance to savor Achebe's voice, with its mix of faint lisps and accentuated locutions. â€¨

That interview happened thirty years ago. It had been followed by several other encounters with Achebe, but it still stands out in my mind. I had admired the man from a distance, in awe of his extraordinary powers as a writer. After he saved my career, I was inspired by his uncommon generosity.

I was so impressed by Achebe’s example that I became something of a lifelong student of his work, my PhD dissertation focusing partly on his deployment of history and memory in his writing.

In 2009, Brown University lured Achebe away from Bard College, scoring a major transfer of intellectual assets. At the Ivy League Brown, Achebe assumed the chair of the David and Marianna Fisher University Professor of Africana Studies and Literary Arts. With his blessing, Brown University also invited me to take up a visiting appointment.

Achebe was a widely honored and highly decorated writer, winning some of the most prestigious literary prizes, including the Man Booker for the sustained excellence of his oeuvre. In 2010, he was awarded the Gish Prize, established in 1994 as a bequest of two sisters, Dorothy and Lillian. The $300,000 prize is bestowed each year on “a man or woman who has made an outstanding contribution to the beauty of the world and to mankind’s enjoyment and understanding of life.” Part of Achebe’s particular contribution was his insistence to speak courageously to power, to bear truthful witness. His genius lay also, I suggest, in his signature clarity of language and brevity of utterance. He did not seek to confound. And he respected language too much to indulge in superfluity. Among us lived a man who for eighty-two years never wasted a word!

The sentiment behind the Gish Prize sums up, for me, the essence of Achebe the man, writer and citizen. He strove in his own quiet, stubborn way to make the world more beautiful. I was blessed to have known him at close quarters, ennobled by his extraordinary example as a writer and human, and ever indebted for the opportunity to learn at his feet.

Written By Okey Ndibe, a visiting professor of Africana literature at Brown University, is the author of the novel Arrows of Rain and the forthcoming novel foreign gods inc.