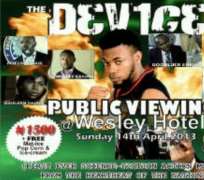 The revolution hitting Nigeria's booming film industry has taken a new step. This is because a young and talented movie producer has taken the bull by the horn and has gone ahead to set the pace while others follow.

Kaydee Films, which is based in Benin City, Edo State, has shot a high tech science-fiction (Sci-Fi) movie titled 'The Device'.

In a chat with Nollywoodgists.com the producer said 'The Device' was shot to revolutionise Nollywood. The film tells about shunning corruption in the society.

When asked the motive behind the movie, the producer said, "I just want to let Nigerians know that we can do movies with visual effects."

Asked what the budget was, we were told the movie gulped between N5million and N5.5million to complete. On how he was able to raise such an amount, he said, "I sold my inherited land, took a loan and sold my car to raise money for the movie just to achieve my dream."