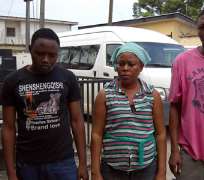 When the charge was read to them, the accused pleaded not guilty.

One of the charge reads in part,” that you Abubakar Isah, Bose Osaji, Dodo Mohammed and one Monday, now at large, on or about the 14th day of November, 2012, along Seatruck Road, Enerhen, Uvwie Local Government Area, Delta State, within the Jurisdiction of this Honourable Court did conspire among yourselves to commit felony to wit; dealing in petroleum product without appropriate authority and thereby committed an offence contrary to Section 3 (6) of the Miscellaneous Offence Act; CAP M17 of the Revised Edition (Laws of the Federation of Nigeria) Act 2007 and punishable under section 1 (17) of the same Act”.

The prosecution counsel, A. A. Ozigbu asked the court for a date of trial but the defence counsel, L.V. Atubi prayed the court to grant the accused persons bail.

Justice Abubakar granted the accused persons bail in the sum of one million naira each and two sureties in like sum. One of the Sureties must be a civil servant resident within the jurisdiction of court.

The case has been adjourned to May 14, 2013 for commencement of trial.